Nikon announced the first Android camera to hit the market. The Coolpix S800c is a 16 MP Wi-Fi camera powered by an unnamed ARM Cortex A9 processor with 512 MB RAM running Android 2.3.3 that will sell for $349.

The S800c is basically a smartphone without the voice network capabilities, but with a proper camera capable of shooting clear pictures and videos, and a 10x optical zoom. Nikon also included a GPS to add localization info to pictures. 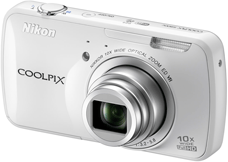 Nikon lists the primary features of their Android camera as follows:

The camera also features 4GB internal Flash (My guess as 680 MB is reserved for apps and 1.7 GB for storage) a SD/SDHC memory card slot, an Hi-Speed USB port, and it is powered by a Li-ion Battery.

You can watch the video promo below which will show you that the Coolpix S800c  camera is so much better than your smartphone when it comes to taking pictures, that it will really impress your girl and your friends, and that you will end up becoming some sort of social media celebrity thanks to the great pictures you will take and share…

You may find further information on Nikon Coolpix S800c page.

Ha, cool … that was my expectation / prediction more than a year ago: camera’s with Android.

And then, of course, Roomba’s with Android.

…and at that point you can delegate your entire social networking experience to a machine that just roams around and publishes stuff. Which is pretty much what the wealthy/famous do, except they have to pay an actual human to do it for them.

Wow, this is awesome, a proper camera with a customisable application?

If this keeps up – never again will I have to buy a locked down appliance with it’s shitty software which can’t be improved upon or replaced.

oky, I’m sure it must be having a rechargeable battery, a good mic and a speaker too. So just add a $10 Qualcomm MDM66xx series cellular 3G chipset and a 2$ antenna for all bands. And it would turn into a perfect camera phone.
One less device to carry and charge. 🙂 may be some day.

Android is also part of the Genivi standard for infotainment in the car: http://www.cnx-software.com/2011/10/11/montavista-adds-html5-and-android-support-to-its-genivi-compliant-automotive-technology-platform/ so eventually Android will be in many cars.

cnxsoft :
@Sander
Android for the car should already available very soon: http://www.cnx-software.com/2011/12/10/renault-r-link-in-vehicle-infotainment-system/
Android is also part of the Genivi standard for infotainment in the car: http://www.cnx-software.com/2011/10/11/montavista-adds-html5-and-android-support-to-its-genivi-compliant-automotive-technology-platform/ so eventually Android will be in many cars.

Thanks for the info. I would think a generic system wouldn’t need to cost 500 – 1000 Euro; a 200 Euro Android Phone can do about anything a car system needs to do: radio, music, bluetooth phone connection, navigation, possibly some care info (via the ODB interface?).

@Sander This needs to be automotive grade: the device must support a wide temperature range, Silicon manufacturer must provide long term support (I think commit to manufacture parts for at least 7 years), and it probably has to comply with some government / safety regulations. This with the fact it will be low volume (compared to tablets for example) should explain why it’s more expensive. The downside with such system is that if you buy a car featuring an IVI system with Android 2.3 or 4.0 today, then you’ll probably still use the same system in 10 years time, unless… Read more »

Ah, I forgot: Android in satellites. Why not? 😉