Earlier today, a reader left a comment about a mini PC based on RK2908 sold for $40 including shipping on Ebay. No bad! But since I hadn’t checked mini PCs on Aliexpress for a few months, I decided to have a look for cheap devices. The cheapest sold by a company with decent feedback is the IP872 ($34 including shipping), but it’s based on an ARM11 chip (Infotmic IMAPX 200) and runs Android 2.3, so I don’t find it that interesting. There are also some AllWinner A10 mini PCs that cost just above $40 including shipping, but then I found one company selling UG802 for $46.50 including shipping via China Post. It’s quite shocking that the price halved within 3 months, and this makes single core mini PC that less attractive, unless you want to run Linux (Ubuntu, Debian…) which is not yet supported by RK3066. 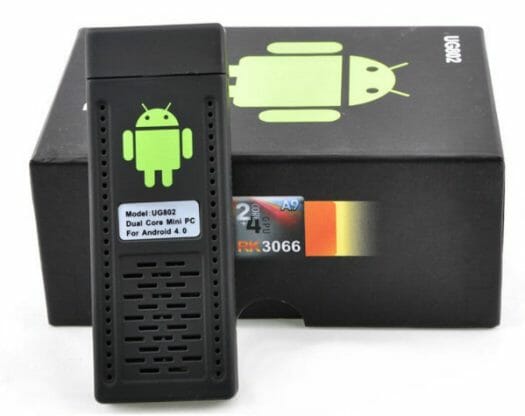 The device sold by Shenzhen Realtime M&c appears to be the standard UG802 HDMI TV Stick:

The device ships with a USB cable and a user manual in English, but no power supply.

At this price, the only device that may dethrone UG802 could be the Hiapad Hi802 (aka GK802) with Freescale Quad Core i.MX6Q and both Android JB and Linux support, although it will probably cost at least twice as much once it becomes available later this month.

Without rockchip support, would it ever be possible to get linux ubuntu on rockchip based stick?
Are we saying that Rockchip does not comply with GPL by not releasing the source code?
In all cases we should still be able to have linux chrooted next to Android, right? ( I understand rk3066 can be rooted )

@nghia
Some source code has been released by one tablet manufacturer, so we will see how it goes.

About the license, I understand it works that way:
Rockchip releases a SDK with source code to OEM/ODM under NDA.
Then those either breach the NDA or the GPL once they start to sell products to end users. I guess those that do eventually release GPL source code do that with Rockchip agreement. That’s speculation from my side, maybe other people know better.

@zoobab
The link to ebay, yes, but I talk about RK3066 mini PC sold in Aliexpress in the rest of the post 🙂

@nghia
A couple of people are working on linux for RK3066, see (& AndrewDB’s Oct 28 comment on the ArmTvTech forum). 🙂

Am I right in thinking nothing (or very little) will need to be done to get Linux working on a multicore version of the A10?

@JL who is this tablet manufacturer and the reference of the tablet? Any link?

Hi CNX, All those tv sticks do not suit me as I have a projector so would have to extract sound from HDMI which is too much of an hassle. Considering that, I think the MK 805 (which is about 50$ shipping incl.) is a lot more convenient for me because it has analog AV ouptut. http://www.aliexpress.com/wholesale/wholesale-mk805.html?SearchText=mk805&CatId=0&manual=y&SortType=price_asc&filterCat=5092303,44,4402 But I still wonder: #1 Would it be easy to install Linux on it and roll its media player on it considering it’s Allwinner (Boxchip) A10 1.5GHZ (Cortex A8) #2 If yes, how will be the HD streaming according to you and the… Read more »

@Slowstream
#1 The processor is Allwinner A10, then yes you could install Linux.

#2 For HD streaming, the best is to use Ethernet, but since this box has an external Wi-Fi antenna, it should be OK, as long as you don’t start streaming 40 Mbps videos. The processor is not usually an issue with streaming, especially when it supports HW video decoding.

@Jean-Luc Aufranc (CNXSoft)
OK Thx. And since I have bought a cx01 stick for my friend, I would to know how both will
will compare? I know that CX01 we don’t have HW accelaration, so will this make a good difference,
cause right now some flah video stream with cx01 has serious problem.

It is my last answer.

@Slowstream
CX-01 does have video hardware acceleration, but Wi-Fi performance is an issue. Somebody told me he solved poor video playback by using Diceplayer.

RK3066 is a much faster processor then CX-01 (Dual core Cortex A9 up to 1.5 GHz vs single core Cortex A5 up to 833 Mhz), so UG802 should have better performance than CX-01. Now the only things going for CX-01 are the smaller form factor and theoretically lower power consumption.

“unless you want to run Linux (Ubuntu, Debian…) which is not yet supported by RK3066”

Hey, you can’t do that: “I’ll be on vacation this week until next Monday Nov 19, so no more updates this week! ” :p

he want to kill us with the vacation comment. how can be so mean lolololololol

From the way the price has been falling, I think sub $40 will be pretty common soon. Maybe time to revisit Ubuntu on the UG802?

Beware! Ordered on 11/3/2012 and nothing received yet… Did anyone receive it?