FOSDEM 2013 took place last week, and the organizers are in the process of uploading videos. Up to now, 5 main tracks sessions have been uploaded (Firefox OS;  Free, open, secure and convenient communications; FreedomBox 1.0;  Samba 4; and systemd, Two Years Later) as well as over 20 lightning talks.

You can find the videos at http://video.fosdem.org/2013. You may also want to check my previous post for a lists of interesting talks, and I’ll probably feature some FOSDEM 2013 videos in this blog, at least the open source GPU driver talk. 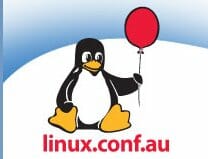 Linux Conference Australia took place on January 28 – February 1, 2013, and the 5-day conference featured lots of talks including several dealing with graphics in Linux, and one developer apparently trashing X in terms of complexity and performance, and explaining how Wayland was better. Others Linux sessions dealt with subject such as 3D printing, supercomputing, Arduino, big.LITTLE processing, open source, git, Raspberry Pi, UEFI, and much more.

You can download LCA 2013 videos in MP4 or OGV formats.

Couldn’t find that “Systemd in Debian” video. Maybe it is not published yet, will wait.

@cray
Yes, for the FOSDEM videos you may need to wait a little longer to get the one(s) you want.

“one developer apparently trashing X in terms of complexity and performance”