For those of you who prefer to have a full sized set-top box with an Ethernet port powered by Rockchip RK3066, there aren’t that many options (i.e. Mini X5, TVi7, Wise TiVi Box) and they are usually significantly more expensive than equivalent mini PCs. But there’s no a cheaper option with UG008, a media player powered by Rockchip RK3066 with 1GB RAM, 4 to 8 GB Flash, as well as Ethernet and Wi-Fi support, that sells for around $62 and up. 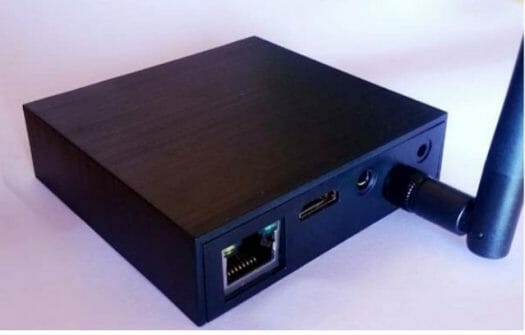 Here are the specifications of this media player:

I would have liked to see some extra USB ports on this device, because with only one USB host port, you may need to connect a USB hub to connect input devices, or/and mass storage devices.

If you don’t mind running XBMC in Android, you should be able to run it with video hardware decoding in the box (or any RK3066 devices) using the experimental builds (filename like xbmc-xxxxx-xxxxx-android-hwaccel-armeabi-v7a.apk), although those apk may not be very stable right now. If you want to run Linux, PicUntu could always be an option with some work.

This Android media player comes with an HDMI cable, a power adapter, and an external Wi-Fi antenna. It is sold for $68 on Geekbuying (8GB NAND flash?), as well as some stores in Aliexpress for just over $60.

UG008B media player (pictured on the right) has about the same specs as UG008, but adds Bluetooth 3.0 and a casing with a more rounded shape. I could only find it on Aliexpress Ugoos store (the manufacturer) for about $70 including shipping via China Post, or a bit more via Hong Kong Post (recommended).

any info on which webcam works with this device?