Here’s yet another mini PC based on Rockchip RK3066. MK812 mini PC looks just like Kimdecent B12, but the version version has been updated by replacing one of the microUSB ports with a jack to insert the cable of a high gain 3dB antenna. The antenna has a magnetic base so that you can stick it on your metallic furnitures… Update: Only 1GB RAM finally. 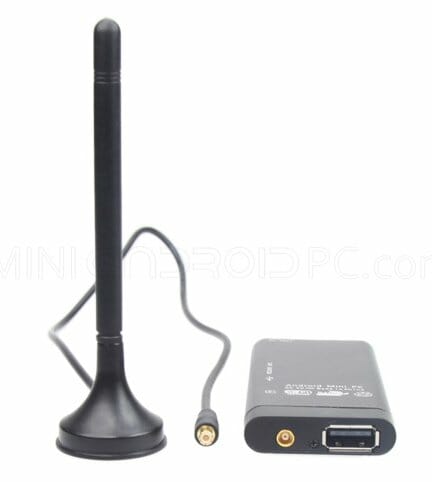 Here are the MK812 specifications as shown on MiniAndroidPC:

Allwinner must be a mistake since the only dual core they have is the AllWinner A20 (dual core A7), and it’s not even available in tablets yet, so it should be Rockchip RK3066. FYR, the internal model name is S21D.

MK812 comes with a 5V/2A power, a short HDMI cable, a miniUSB to USB cable, a USB adapter (mini USB to standard USB female) and a user’s manual.

I could not find any Wi-Fi benchmark between mini PCs with internal antenna and those with external antennas, so I can’t confirm for sure you’ll get a Wi-Fi performance boost. If somebody has some data about this, please leave a comment.

MiniAndroidPC sells the device for $75 including shipping. I’d like to give a few warnings though:

When a RK3188 version comes out & the multicore Lima drivers are working & they come with 4gb… :p

Thank you for introduce our upgraded mini pc of MK812.

@MiniAndroidPC
Thanks for the update about the amount of RAM. This part of the specs (and the CPU) is quite important to get right the first, or some customers may be very upset. btw, I hope there’s no virtual memory in the stick, it’s not usually a good thing for the flash.

About the Wi-Fi antenna performance, I’ll hopefully find out soon, as somebody promised to send me a sample once it’s available.