Rockchip is currently at the Hong Kong Electronics Fair showing off their RK3188 quad core processor, and corresponding products such as tablets, gamepads, HDMI TV dongles, etc… Business seems good as they already received orders for 800k pieces in about a month, and they expect to sell 10 to 15 millions over the course of the year.

The company had also a few RK3066 devices on display, but more interestingly they announced RK3168, which also a dual core Cortex A9 processor, but with lower power consumption thanks to 28nm HKMG process, instead of the 40nm process used for Rockchip RK3066. They have a tablet prototype without battery connected to a power supply to show the power consumption, and the tablet under test consumes 280mA @ 3.8V (About 1 Watt) when decoding 1080p videos with the display brightness set to about 50%. 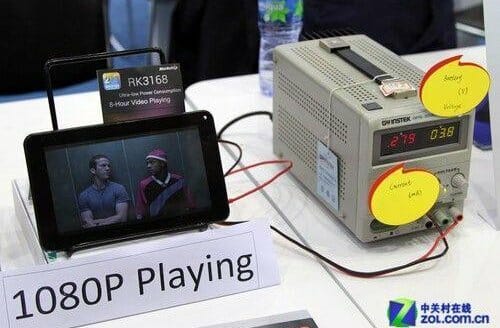 Chen Feng, Vice President at Rockchip, explains that with a 3,100 mAh battery, you can play full HD videos for 10 hours. I don’t have further details about RK3168, but I would assume it’s just a low power version of RK3066 and everything else is basically the same (TBC). He also quickly mentioned RK3028, a dual core processor pin-to-pin compatible with RK2928 single core Cortex A9.

The company also had a few demo to show some new features for Android such as multiple windows support,  hand writing recognition, and Miracast with Android 4.2.2 with about 80ms lag. Chen Feng, Vice President at Rockchip, explains that 720p is working fine but 1080p may be more challenging for both the Miracast source and display.

Speaking about Miracast, they also have an ultra-low cost Miracast dongle built around RK2928 running Linux with 16MB RAM and a small NOR flash that can be produced for as low as $10 US. This is obviously the manufacturing price or possibly just BoM cost, but it still means we should be able to buy Miracast adapters for $20 to $25 in a few months.

You can watch Charbax video interviews (about 22 minutes) below to see more products and demos based on Rockchip devices.

Near the end of the video, they talk about Linux and the open source community, Chen explains they already have Ubuntu and Chromium OS running internally, and although they focus on Android, they let engineers have some free time to play around, and that’s how they ported Chromium OS to RK3066 within 3 weeks. He also admitted that Rockchip was not so open until now, but this will change. However, when asked when this would be available, he just answered everything is already available out there in the public domain…

A Miramar Linux stick with 16MB RAM? I would say that means you can’t run any Graphical / GUI stuff, only the plain kernel plus CLI utilities.

Or am I overlooking something?

@Sander
It would only be used for Miracast, possibly with a web interface if you need to configure something, just like a router.

I thought Miracast was some brand, but I now see it is a screencast protocol (like Airplay). Interesting.

Thanks for the info.

This chip for portatil console?? 8-10 hours for emulators games?