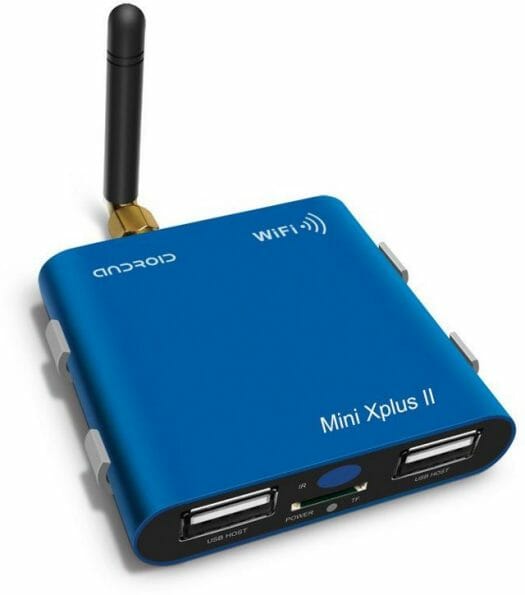 The device comes with an HDMI cable (1.40m), an AV cable (1m), a Wi-Fi antenna, a 5V power adapter + cable, and a user’s manual in English. It might be interesting for those of you wanting composite output with dual core performance at low price. Even though there’s an IR sensor, this year model does not seem to include a remote control.

It’s running Android 4.2.2, but there seems to be good process on AllWinner A20 boards including Cubieboard 2, Olimex A20-OLinuXino, and Qimod EOMA68-A20 PCMCIA module, as they can all boot Linux with various degrees of success. There are still a few issues to work on, but some workable image will probably be available later this month, and I’m sure Linux will soon show on AllWinner A20 STBs as well

MK805 II is available in Red and Black on DealExtreme for $59.80, and they apparently forgot to list the Blue version this time. The manufacturer is still Pineriver.

@Ian W MORRISON (Linuxium)
What does an A10 score with that vn of antutu?

@Ian W MORRISON (Linuxium)
I’ve read A20 tablets get around 8,000 somewhere, this seems very low, The score is the same in DX.com (probably the same screenshoot)

@Jean-Luc Aufranc (CNXSoft)
Around 2600 – http://tabletrepublic.com/forum/android-mini-pc/mini-pc-benchmark-comparison-2537.html – I haven’t got around to updating the community database Mini PC comparison table (http://socialcompare.com/en/w/usb-stick-dongle-mini-computer) with this info, however if anyone wants to, or has better or more comprehensive data, please go ahead 😉 (see http://www.cnx-software.com/2013/04/28/collaborative-comparison-table-for-hdmi-tv-dongles/ and http://liliputing.com/2013/04/want-to-help-create-a-database-of-android-tv-sticks.html or front page http://liliputing.com/ right-hand column).

I am heading for the Jesurun A19 with identical specs -and a lot more, though no external antenna.

In the meantime on DX as well lilbit cheaper than FP, android 4.2.2

Looking forward to the linux, for it seems A10 is almost identically pinned as the A20

@Ian W MORRISON (Linuxium)
The score for A10 is based on Antutu 2.9.x, so it can be quite different from Antutu 3.x.x