Microchip Technology has just announced a new family of PIC32MX3/4 MCUs featuring a MIPS M4K core @ 80 MHz, coupled with 16 to 128KB RAM, 64 to 512KB flash, that are designed to be used in connectivity, graphics, digital audio and general-purpose embedded control. 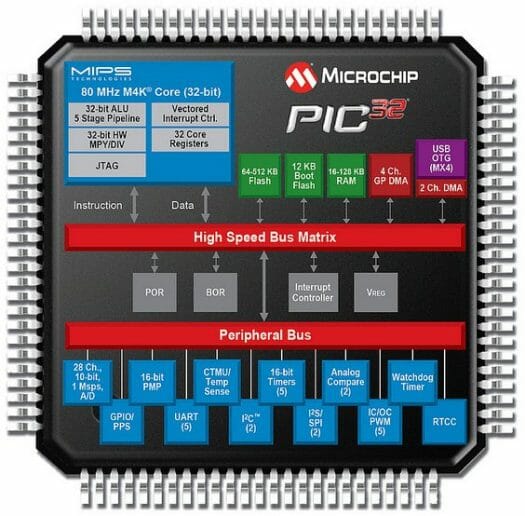 Microchip PIC32MX3/4 32-bit micro-controllers have been available for several years, but the company added 7 new MCUs with more memory, higher integration of peripherals, and lower cost.

PIC32MX3/4 key features are as follows:

The company provides software development tools such as MPLAB X Integrated Development Environment and the MPLAB XC32 C/C++ compiler, as well as application-specific tools such as the Microchip Graphics Display Designer X which provide a visual design tool that enables creation of graphical user interface. Protocol stacks  including TCP/IP, USB Device and Host, Bluetooth, and Wi-Fi are also available from Microchip. The platform supports MP3 and AAC (software) codecs, and software for tasks such as audio processing or smartphone connectivity are also provided. To quickly get started, development can be done with PIC32 USB Starter Kit III ($59.99) and PIC32MX450 100-pin USB PIM ($25.00) for Explorer 16 development platform.