A few days ago, I saw some benchmark results showing Xiaomi M3 smartphone powered by Snapdragon 800 SoC getting a ridiculous score above 80,000 points in Antutu, but thought it was really odd, and it turned out to be a fake Antutu screenshot. The actual scores for Snapdragon 800, are much lower, yet one of the fastest mobile platform ever, according to benchmarks performed by Engadget, which hold of Qualcomm Snapdragon 800 Tablet and Smartphone MDPs. 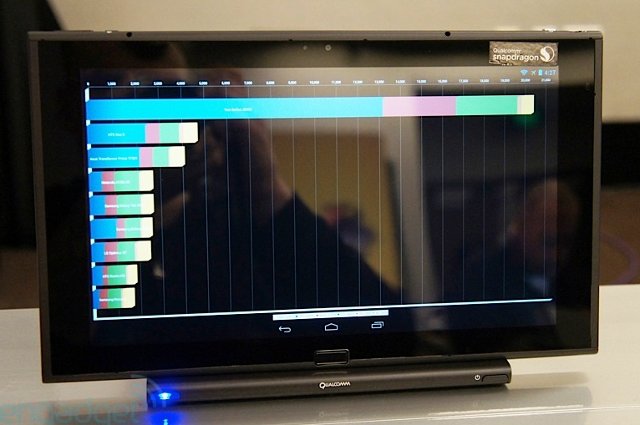 Engadget provided comparison of the benchmark for 12 devices, but I selected the 4 most powerful of the lot in the table below.

Exynos 5 Octa is the slowest of the lot, probably because of the maximum 1.6 GHz CPU clock used in Galaxy S4. Nvidia Tegra 4 and Qualcomm Snapdragon 800 appears to be evenly matched in the few benchmarks that are available for Tegra 4, with Snapdragon 800 getting a better score in Quadrant, but Tegra 4 clearly outperforming the quad core krait processor in 2 other tests. Antutu 3.x scores are almost identical. Bear in mind that Tegra 4 (1.9 GHz) and Snapdragon 800 (2.3 GHz) are both part of reference platforms in those tests, so frequency may have been boosted more than it will be in actual products, as battery life may become an issue at high frequency.