I attended Barcamp Chiang Mai 6 yesterday, and sessions dealt with a wide range of subjects ranging from SEO and web development to things like nuclear energy, VMAT2 God gene, or Edward Snowden. There were just four talks somewhat related to the subjects I usually write about in this blog:

Thomas Tilley gives software engineering lectures at Payap University in Chiang Mai, but he’s been pursuing an interesting hobby for several years: joystick hacking. This led him to participate in the AFRON “10 Dollar Robot” Design Challenge where participants had to design a very cheap robot to serve as an educational tool for African students in one of three categories:

Thomas took part in the tethered category and won by hacking a cheap dual shock compatible USB gamepad which you can buy for about $3.5 US in Thailand, and adding two Chupa Chups ($0.5 per piece), as well as a few low cost or scraped components and parts to meet the $10 target ($8.96 exactly provided you don’t start to stuff yourself with lollipops). He initially called his creation “Suckerbot”, as Chupa Chups comes from the word meaning “Suck” in Spanish, but he was later asked to change the name, and went for “Lollybot”. 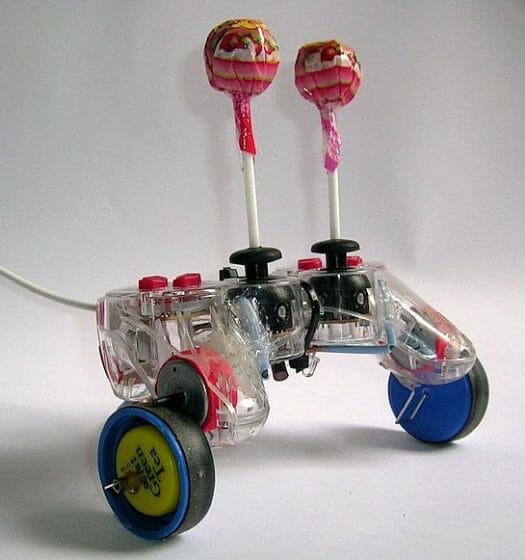 The basic idea is to use the vibration motors inside the dual shock controller as motors for the two wheels (actually container lids), and the lollipops are used as bump sensors in order to know when the robot hits the wall via the analog thumbsticks. There also a bit of electronics to do. Everything is explained in details on Suckerbot page.

One the software task, one of the first thing was to reverse-engineer the USB protocol with a USB sniffer, and then he wrote a control program using Object Pascal in Delphi. Since this was limited to Windows, and later on Delphi only had a paying version, he decided to go with node.js and HTML5 to provide a open source and cross-platform solution.

Lollybot’s telemetry & control software is available from Lollybot Google Code page. You can watch the robot in action in the video below.

As a first trial 100 to 200 Lollybot will be manufactured in Africa, with maybe more on the way. AFRON (African Robotics Network) has started a new challenge this year entitled “Ultra Affordable Educational Robot” to improve on last year designs, and especially the lollybot in 3 categories:

There’s also a “Community challenge” where you have to build one of the winning designs in collaboration with students, and document the whole process.

You have to submit your improvements by the 18th of September 2013, and winners will be announced in October 2013.

Full disclosure: Although this post is not officially sponsored, I did receive a free Chupa Chups lollipop during the presentation 😉

That is a clever idea to use the analog stick and vibration motors like that!