Linaro has just provided a update for the big.LITTLE software implementation.

There are currently only two SoCs that ship in products with Linaro b.L kernel support:

If you’ve got a Galaxy S4 (with Exynos 5410), it’s currently running In-kernel switcher implementation, which means at any time, a maximum of 4 cores can run on your Exynos Octo processor.

GTS is supposed to be better than IKS because it permits a finer control of workloads between cores, it is faster than cpufreq framework, works on non-symmetrical SoCs (e.g. 2 A15 + 4 A7), and can use all cores simultaneously. The only reason why IKS is currently running in Galaxy S4 is because it was much simpler to implement. The goods news is that GTS is now publicly available in Linaro monthly engineering releases for the ARM TC2 Versatile Express hardware, and in Linaro’s interim Long Term Supported Kernel (LSK) build. Upstreaming has started but will likely take a few months. 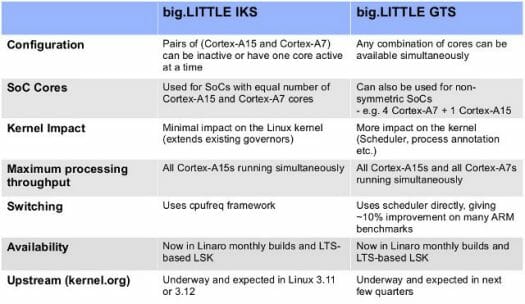 Samsung-LSI provide an ‘Octa-core’ 4+4 big.LITTLE chip for this phone. As has been publicly noted, the current generation of hardware cannot yet take full advantage of the IKS or the GTS designs because the hardware power-saving core switching feature is implemented on a cluster basis rather than on a per-core or a per-pair basis. Even so, the first big.LITTLE implementation produces performance and power consumption on a par with the latest Qualcomm multi-core Snapdragon processor according to reviews from Engadget, PocketNow and others.

That means we’ll need to wait for future SoCs to fully take advantage of big.LITTLE processing.

Good to know that we are progressing!!