DSLR Controller is a paid Android app (beta) that uses your Canon EOS DSLR camera USB port in order to control it and access the camera live view with a tablet or smartphone. That may be useful, but it’s much better if you can roam a bit, and are not limited by the USB cable length. That’s why the application has been improved some time ago in order to use 2 Android devices, usually smartphones or tablets. One device is connected via USB to the DSLR camera, and act as a Wi-Fi access point, and the other device connects via Wi-Fi to allow full control of the camera. 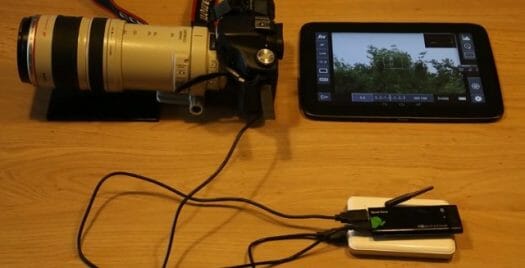 However, you don’t really need a screen on a Wi-Fi access point, so instead of using mobile devices, the developers decided to use an Android mini PC, specifically CX-919, which is just one of the many RK3188 mini PC available today, coupled with a USB power bank, and called the solution “DSLR Controller Wi-Fi Stick”. The DSL controller app has been customized for the device, and is available on Google Play (Free for 7-day, and paid afterwards).

This solution costs about $100, which according to the developers is about 200 to 400 USD cheaper compared to existing commercial solutions. Instructions for the whole setup are available on dslrcontroller.com.

I bought TL-mr3040, installed openwrt and installed DSLR Dasboard server https://code.google.com/p/dslrdashboard/ which just forwards USB PTP commands via WIFI network to Android. This solution seems to make much more sense since the battery is built in and I dont waste power for whole Android system. Unfortunately the developements is somewhat frozen and last commit to source code is quite old.