If you’ve got a Rockchip RK3188 mini PC, there’s usually no issue with finding firmware updates, or even custom ROMs. But if you’ve bought an AllWinner A31 mini PC, such as CS868, you may feel everybody dropped the ball, as the system is not stable, and it seemed there would never be any upgrade.

Here’s the Changelog against V2.05:

You can also access the forum for earlier releases, and hopefully upcoming firmware releases.

I’ve installed the new firmware with the method provided previously. I used the English tools, with the new key and firmware files, and firmware updated went smoothly. 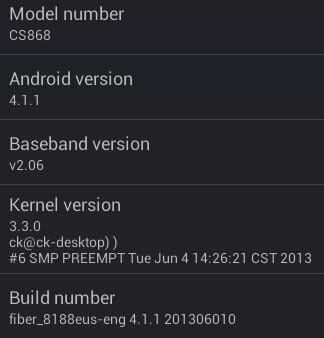 I haven’t really tested it much, but there’s now three launchers, including Firetop1X, a new Chinese SMART TV launcher, as well as two new applications called Fireair Receiver and Miracast, for respectively DLNA/UPNP, and Miracast support.

During the few minutes I played with the system, I lost control of Mele F10 twice (unplugging and reconnecting the RF receiver fixes that), and playing videos in YouTube app, just show a black screen, although audio works. So it still seems very much work in progress to me.

Via Adem on Google+

An often overlooked factor with the newish ARM based toys is stability. They sorta work but system malfunctions are not at all unusual in my experience. Maybe this is acceptable to the casual user but it becomes a real show stopper if you start trying to build things like an advertising kiosk or network storage device or anything that is expected to be up and running 24/7.

@JQPABC123
You’re right. Users of the latest “toys”, at least Chinese toys, are often used as beta testers…
I have one company who has sold a set-top box for nearly 3 months, and they’ve told me they can’t send the unit for review yet, as they are working on a more stable firmware… It could also be an excuse for not sending it, but I guess the firmware takes time to iron out.

@Jean-Luc Aufranc (CNXSoft)
… but I guess the firmware takes time to iron out.

Just think of all the poor saps who’ve been buying the less than stable version for the past 3 months. But as they say, buyer beware.

i also found the beta v3 rom for the cs868 from the chinese site that you can find the link above. i flashed my device but was not able to boot into the system. i have ordered another mk908 which will arrive in 3 weeks time i am soo upset with the cs868 they advertised it as 4.2 then on the bottom of the page somewhere it says that it is upgrade-able to 4.2 and when i asked my supplier for a link for 4.2 he or she did not have a clue. i also orded a tablet (ondav711s) quod… Read more »

does any one know how to edit the .img i cannot even extract it i used winrar 7zip something called kitchen suit

@adem
The tools may have evolved between A10 and A31, but try to have a look at http://linux-sunxi.org/LiveSuit_images
I guess you found the “kitchen suit” at https://www.miniand.com/wiki/Allwinner/Unpacking+and+building+LiveSuit+images.

If you still can’t find solution, ask on #arm-netbook IRC.

hi people i did something very silly. i tried to install CWM on this device (cs868) using the dd command which did not work but when i re flashed the device i have very little room to install apps it tells me that i have not enough space on the device it should be 16 gig rom does any one know what i did and how i could fix it i have little linux and cml knowledge. i dont have much knowledge on android partitioning scheme

hello cnx i just installed cs918s firmware on my cs868 it seems to be really good running android 4.2.2 but i have no wifi or ethernet i think the FW was adjusted to work with the measy u4k can you guys help. ??

any news about this device any new F/W