WigWag is an home automation kit aiming at simplifying home automation, yet allowing developers to roll their own system via Arduino and Raspberry Pi Shields. Wigwag is currently composed of three devices:

Those 3 devices, and other connected “things” communicate via 6LoWPAM, and you can setup “rules” via an Android or iOS application, or via your web browser, for example: When “motion” then turn “lights on” and “notify phone”.  Possibilities are listed in the table below. 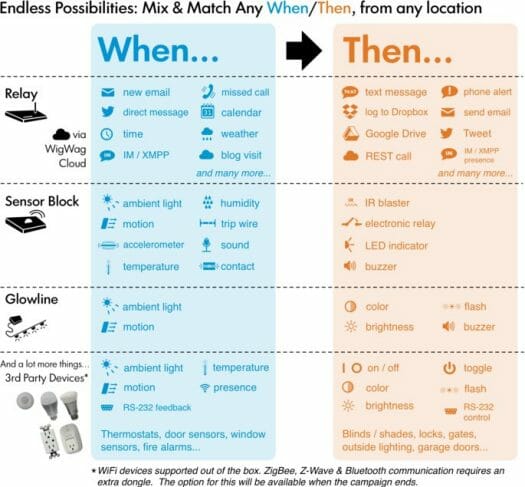 Software for the Arduino and Raspberry PI development boards will be available on Github, and hardware designs for the Development kits will be provided once those are ready to ship.

WigWag is on Kickstarter, and already funded, to start mass-production for the devices. The lowest pledge still available ($139) will get you a SENSOR KIT with 1 Sensor Block and 1 Relay, where as the developer kit goes for $249. Shipping is free to the US, but you’ll need to add between $15 to $30 for international shipping depending on the pledge. The different options are clearly explained in the table below. 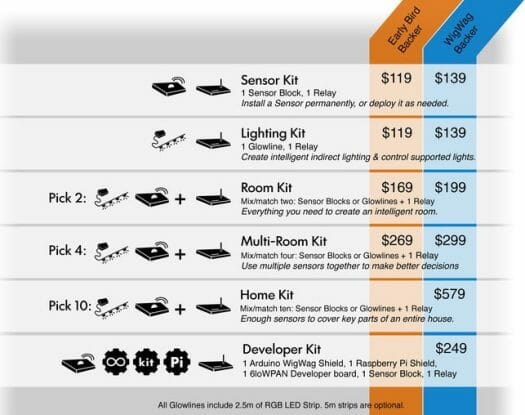 will this work with my light.

@Carlos Danger
In theory it can, but you have to somehow connect it to your lights. That could involve some work like removing the standard light switch, and connecting it via relay.