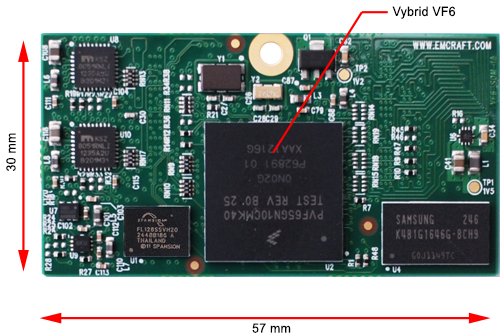 Emcraft supports Linux as an operating system for the Vybrid Cortex-A5 processor core and MQX as an RTOS for the Cortex-M4 processor core. The company provides a starter kit guide publicly, as well as a software development environment (U-Boot firmware, Linux kernel, busybox and other target components, a Linux-hosted cross-development environment for both Linux and MQX, and a framework for developing multiple projects including sample projects), and pre-built Linux and MQX images for download to their customers in VF6-SOM software page.

VF6 SOM Starter kit is composed of VF6 SOM board, TWR-VF6-SOM-BSB baseboard, and a Mini-USB cable UART/power interface. It can be used in standalone mode, or as part of Freescale Tower system.

VF6 SOM is available now and pricing starts at $49 per unit in 1k unit quantities for the low-end configuration (128 MB RAM, 128 MB NAND Flash, 1x Ethernet PHY). The starter kit is available for $179. You may find more information on Emcraft VF6-SOM page.