Lenovo has recently announced the Lenovo A10, an Android 4.2 netbook featuring a 10″ touchscreen display, and powered by Rockchip RK3188 quad core ARM Cortex-A9 processor coupled with 2GB RAM, and up to 32GB storage. 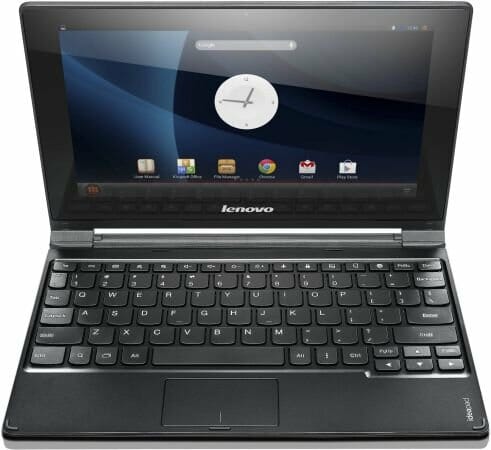 Here are the specifications of this laptop:

The screen can be flipped around 300 degrees so that the device can be used in “laptop mode” or “stand mode”.  In “laptop mode”,  the company has designed a customized user interface, with an app launcher, task bar and status bar, as well as a file manager. In “stand mode”, I understand the device would be used like a tablet.

Lenovo did not provide much details about availability and pricing, but they did say it would not be available in North America. The Verge reported that pricing would start at about $250 equivalent.

Via Liliputing and Benjamin.

“The screen can be flipped around 300 degrees so that the device can be used in “laptop mode” or “stand mode”.”

Now if that was 360 deg, it would be a 10 tablet-netbook. Instead it’s a touchscreen netbook-“thing-that-seems-very-easy-to-break”.

Anyone have a guess as to why Lenovo isn’t selling this product in North America?

I don’t know why Lenovo is interested on this market… and $250… come on… with a rockchip soc!

For much less than 250$ I think you can get a tablet based on the same HW design (with a better screen/camera) + a keyboard !

N.B.: since it is presented as a “laptop”, does it come with root access enabled and unlocked bootloader ? do they provide kernel source-code (and/or .dts) for this board so that we can recompile/install a real alternative Linux system (e.g. Picuntu) ? does Lenovo commit in long-term support ? (e.g. will release updates of future android versions for this hardware)

It is available at Amazon.de for 291EUR (a bit pricy):

For 300E-400E I remember seeing an I3 touch screen laptop and since Windows 8 failed on touchscreens I think you can find such a model for the cheap. But the market will decide the price.
I only hope more manufacturers will release tablets that can take a real keyboard, touchscreens alone just aren’t enough sometimes.

For $250 you can get a Chromebook from a (more) reputable vendor (Samsung), which has more interesting tech in it (A15), and on which you can run pretty quickly and decently your favorite Linux distro in a chroot with https://github.com/dnschneid/crouton (writing these lines on it). Running Linux natively is also much more advanced there.

Interesting price for these Android sub-books is sub-$100.

i think the little big exynos chromebook would be a killer

waiting for their rom, planning to port the rom to radxa rock 😀

soc is good, but this price is too much for that hardware. it dont convince me, lenovo seems to lucrate too much on this product: keybord look “low quality” and monitor is little (to me, minimum is 12”). Nice try, lenovo, but you fail. Let another seller came here offering us better price/quality ratio.