The VERVE is a little box that connects to one of the USB port of your Windows or Mac OS X computer (Linux support coming in 2014), and supports up to 7 sensors. It is available as part of a kit for $99 on Kickstarter. The kit includes the VERVE, a mini USB to USB cable, seven “sensors” (A force sensor, a push button, a light sensor, a potentiometer, a motion sensor, a magnet sensor, and a touch sensor), two banana clips for the touch sensor, seven cables to connect the sensors to the VERVE unit, and 5 extension blocks. 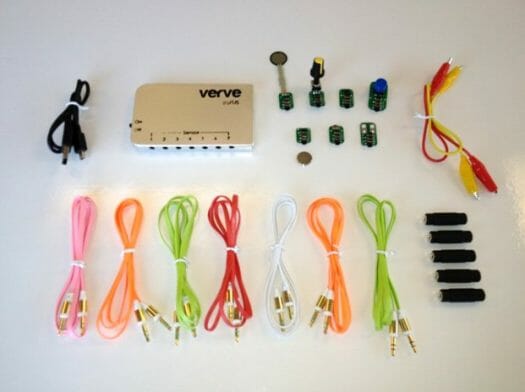 Once the VERVE unit is connected to your computer, and the needed sensors are connected to the VERVE, you can launch the VERVE application to visualize the sensors data in real-time, and assign a mouse or keyboard action based on the sensor’s data level as shown below. 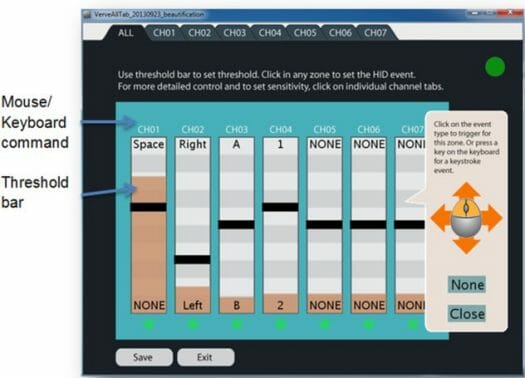 There’s also an advanced menu for each sensor where you can increase the sensitivity, assign up to 10 keyboard/mouse commands, and tell the computer how fast/slow you want each action to happen.

The main application appears to be gaming such as driving a car in a game with your real bicycle, playing music with fruits, playing angry birds with a real slingshot, and so on. You could also use this kit for more serious applications such as home security, factory monitoring, motion tracking, etc… It could also be used for educational purposes. Watch the video below to get an overview of the kit, and a better idea of what you can achieve with it.

There’s no API for now, so the only way to control the VERVE is via the (closed source) application provided with the kit. It will eventually be possible to purchase more sensors via Amazon.com, and if 7 sensors are not enough, several VERVE units can be connected to one computer. The initial trial run has already been done, so they mainly need the funds for mass production, and have an aggressive delivery target for next month (December 2013). As mentioned at the top of the post, the kit costs $99, with free shipping to the US, but international orders will have to add $15.

@onebir
That’s about the idea, except they apparently used a Microchip PIC24 MCU in their 2nd PCB (I can’t see what they used in the final board) so there’s no Arduino here, although their board just look as simple.

From the inXus team. We thank you very much for your review! One quick clarification that may be important to note. The VERVE does not need proprietary software to work, therefore there is no API needed. It works with any computing device and software that accepts USB keyboard and mouse input, including Linux, Raspberry Pi, etc. Sensor settings are stored in a human readable .txt file that anyone may edit or share. Since the output from VERVE is a standard keyboard/mouse protocol, developers are free to create any code they want, in any programming language, to use the VERVE. Our… Read more »

They now have Verve2, still on Kickstarter -> https://www.kickstarter.com/projects/54060271/verve2-connect-your-world-to-your-computer-and-int