Up to now, I always connected USB keyboard and mouse to Android mini PCs I tested. It works but it’s not always fun to use. Mele F10 Fly mouse is a dual sided 2.4GHz remote control with one side being somewhat of a standard remote, while the other side is a QWERTY keyboard. A gyroscope is also integrated in to the remote, which allows it to be used as a “magic” remote and mouse the mouse pointer. I’ve bought one on DealExtreme for $25.20, and I’ll do a short review about the remote today, even though it’s not exactly a new device.

I’ve received the F10 in a slightly damaged package. This happens often as to save on costs packages are often sent in bubble mailers, but all items I’ve received have usually worked fine. 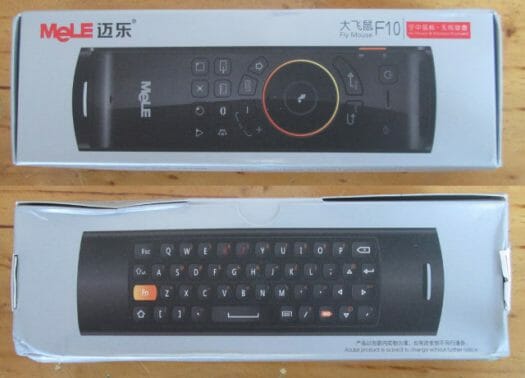 Inside the package, we’ll find the remote itself, a small 2.4GHz USB adapter, a USB to mini USB cable for charging, a sheet of paper that serves both as a user’s manual and a warranty card.

We’ve got the QWERTY keyboard, the standard remote, and a mini USB port for charging. There’s also an emplacement on the right on the mini PC port which is not populated, but that on some model is used to fit a microphone to be able to use voice commands. Not shown in the picture above, is a LED that blinks when you press a key, and when the internal battery needs to be recharged.  There’s also an IR transmitter at the front of the remote, but this is most probably useful for Mele’s own set-top box only (Edit: It’s only used for the Power button). If you use a Linux box with an IR sensor, you could also record the remote code with lirc, and create a specific file. I don’t know how this is handled in Android.

The battery was already charged when I received it, but it’s probably a good idea to charge it before use. To get started, you need to connect the 2.4GHZ USB Adapter to your device/computer, and the very first time, press the right mouse button (Back) and the left mouse button (Enter) at the same time for 2 seconds to synchronize the mouse, and when the pointer disappears press one of the mouse buttons again. I only did this in the first device I tried, and the remote just worked  straight-away with the other devices.

I connected the USB adapter into G-Box Midnight MX2, MK908, and my Linux PC, and it worked immediately without any extra set-up required.

This kind of 3-in-1 remote is really awesome when using with Android touch based applications such as a web browser, navigating Android menu, etc… The only flaw I found is that the mouse pointer alignment seems to shift overtime, and you have to recalibrate it manually, by hitting the sides of the screen. The video below shows this issue and the “fix” clearly. If you have small hands, the qwerty keyboard may feel a little too long, and you may have to stretch out to reach the keys in the middle.

In XBMC application which is designed for IR remote, it’s possible to use the arrow keys to navigate, but the OK button is the right mouse (Enter) button, and the center button in the middle of the remote which is counter-intuitive. There’s also not play/pause, ffwd and frwd keys found on typical set-top box, so you have to use the mouse pointer for those controls. (Edit: Yes, we can reconfigure key assignments, see comment). However, Mute and Volume -/+ buttons work properly on the remote which is a plus.

After seeing one of the latest Mele videos where they showed a game (Similar to TurboFly 3D) controlled by a fly mouse, I kind of hoped some of the games could take advantage of the F10 gyroscope, but that’s not the case. You can play games such as Angry Bird Star Wars using the mouse pointer controlled by the Mele, and I can indeed play TurboFly 3D, but only in keyboard mode by using the arrow keys to control the spaceship, and mouse button to fire.  I contacted Mele for details, and they replied “Most game can not played by the current F10 fly mouse”, which implies a new version should be released with the most popular games supported.

In the video below, I show Mele F10 used with the Android Browser, XBMC, and Angry Birds. I also show the “calibration” issue of the remote.

In conclusion, Mele F10 is a very good device for many applications in Android, and I did not experience the frustration I got with standard IR remotes in Android. However, the current button arrangement is not ideal for XBMC, and none of the games I tried could make use of the gyroscope, although I could play some games in mouse and remote modes.

In newer version, I’d like them to fix the “alignment” issue, provide some play/pause, ffwd, frwd… keys for media player applications, and support more games with the gyroscope. A Bluetooth version would also be useful as many recent Android mini PCs and set-top boxes come with built-in Bluetooth.

This is the best air mouse from China since last year. Classic product.

Thank you for the great review! I just order a G-Box Midnight MX2. What remote would you recommend for XBMC?

@Joe Kingston
For XBMC just use the remote that comes with G-Box Midnight MX2. It works perfectly.

But if you want to use other application, you’d better get something like the Mele.

I can see some people provided a keyboard file for Mele F10 in XBMC Android, which programs the bottom 4 buttons for play/pause, STOP/PREVIOUS/NEXT. http://minixforums.com/threads/mele-f10-home-button-etc.1323/
It could be something to investigate, maybe I’ll try it.

@Jean-Luc Aufranc (CNXSoft)
@Joe Kingston
The procedure is easy, so I’ve just tired it. The play/pause,etc.. key work. But the center key in the DPAD is a “mouse” key and it can’t be reassigned to “OK”/”Enter”, so the Mele F10 is not really appropriate with XBMC, even after reassigning some keys.

What about pinch-to-zoom? Did you test it (I failed to see a reference to it). Does this work. I have a RC11 and this is sorely missing….

@S
Good point. I forgot to test pinch-to-zoom. There are Zoom In / Zoom Out buttons on the QWERTY keyboard, but they have no effect in the Gallery, nor Google Maps.

In Charbax video, the guy from Mele was saying it can also be used as a phone: there is a microphone under the Mele and a small headphone next to the on button. But I have not tested it.

@mj
I think he also said it’s only for the US version. I can’t remember for sure, too many Charbax videos 🙂

But I’m sure there’s no microphone / speaker in my remote.

Hi,
the version with microphone / speaker is expected in Q3 2013.
This is the response form sales.

I quite like the mouse, but the finish is a bit crap with it’s snapped-together look with sharp edges. I always thought it looked like it contained a phone but no audio devices come up so it wasn’t there. To me it looked like they just borrowed an existing case from a (really cheap) handset and changed the guts. BTW from dx my box was almost completely crushed … but nothing was broken. The in-built battery is great, it took about 3 months before I needed to charge it – although i don’t use it that much either. The on/off… Read more »

oh yeah, the lack of tab key makes the keyboard quite useless for form entry.

and ‘return’ usually doesn’t complete/dismiss the form but does something else, but this might be mele specific (the mele firmware is pretty crap/out of date, i wont be buying another mele device again).

i can’t remember the full details, but it is a real pain, you normally have to flip it over and use the mouse mode to click between fields and on next/enter.

For remap the tab key in windows there is a great program and make all remaps perfect: keytweak http://webpages.charter.net/krumsick/
mele F10 is perfect in windows 7 with this program. 😉

Hi. My friend has lent me his Mele F10 to use with a Rikomagic MK802IV on my Hanspree HDTV. The only problem is that the F10 doesn’t want to initialize. Could you point me in the direction of some kind of troubleshooting? Am I missing some kind of driver? If so, what’s the process for installing it?
Thanks!

Has anyone tried these air mice with Linux?

@onebir
Yes, and it works just fine. However, the lack of accuracy of the remote, compared to a mouse, makes it a little difficult to use. I normally just use it when I watch a video via VLC.

Thanks – good to know!
Do you think air mice generally work, or could it be model specific? (Does the OS even realise it’s getting signals from an air mouse not a USB mouse???)

@onebir
Air mice probably all use USB HID class (a standard USB class), so they should all work on Linux, Windows, Android…

Maybe you can advise if the Mele F10 can be charged in regular power socket?
Using the USB cable and let’s say any adapter to connect the USB cable one side and the socket to the other(like I wanted to use iPhone adapter),
Can I do that or I can charge only through USB cable to the tv box device/PC?

@Arthur
Yes you can use a USB power adapter to charge the Mele F10. You can also use it while it’s charging.

Based on Mele F10 but with IR learning function, so you can also use it with your TV, DVB box etc…

do you just plug in to a usb adopter without doing anything else?.. charged overnight but still showing charge on the display on the tv. how long does it need to charge?…I only have it two weeks

sorry i forgot to say its a mele f10 pro

@spainmick
I’ve only used the Mele F10 and Mele F10 Deluxe, but I d assume it’s the same for the Pro version.

The USB adapter should be plug into the device, and that’s it.
For charging you need to connect your Mele F10 (Pro) via USB too. It should charge quite fast, maybe one hour?

There’s nothing on the TV showing up about the Mele F10.

thanks….i got it sorted