The Raspberry Pi, Beaglebone Black and Cubieboard are probably the best selling ARM Linux boards in the sub $50 category, but they’ll soon be joined by Olimex A10-OLinuXino-LIME powered by AllWinner A10 ARM Cortex A8 SoC with 512MB RAM that will sell for 30 Euros (About $40) when it becomes available in December. Another version of the board based on AllWinner A20 dual core Cortex A7 SoC, called A20-OLinuXino-LIME will also be sold, adding Gigabit Ethernet, and scheduled for Q1 2014. Pricing has yet to be disclosed for the A20 version.

Olimex has also designed an enclosure specifically for this board, which will be available for 5 Euros,  as shown below. 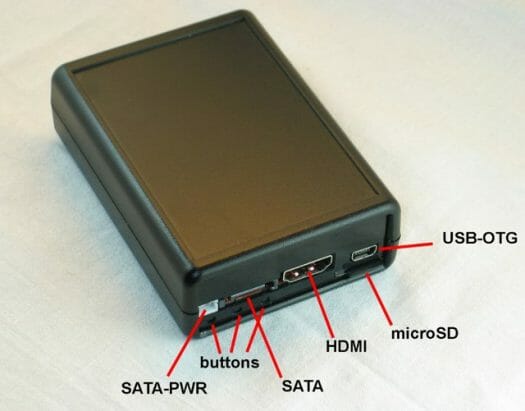 Android 4.2.2 and Debian Linux images and source will be provided for the board, and since it will be open source hardware as most (all?) Olimex products, hardware files such as schematics, PCB layout, and gerber files will be available for download on their github repo.

In my Raspberry Pi vs Beaglebone Black comparison, I concluded that the Beaglebone Black (BBB) had faster hardware, more I/O pins, an internal flash, but lacked hardware video decoding (no VPU), HDMI output was limited to 1280×1024, and had no composite video output compared the Raspberry Pi. On the software front, BBB has support for Ubuntu and Android, which is either missing or poor with the Raspberry Pi, but the latter had a larger community, and probably better educational materials.

A10-OLinuXino-LIME should have similar CPU and GPU performance compared to BBB, support hardware video decoding and encoding (with some issues in Linux) like the Raspberry Pi, output to 1080p via HDMI, has lots of I/O (difficult to compared as details are currently lacking), and can support both Android and Ubuntu. Its main downside compared to BBB is the lack of NAND flash for the 30 Euros version. Compared to the Raspberry Pi, it lacks composite output, but relevant signals should be available via the expansion headers. Olimex’s community is much smaller than the two aforementioned boards, and although support is available via Olimex’s Forum and for the kernel and bootloader, sunxi-linux community, this board will more suited to people with a technical background, or with a willingness to learn and “get dirty”, whereas the Raspberry Pi, for example, may be more suited to beginners.

A10-OLinuXino-LINE and Cubieboard have a lot in common, but the Cubieboard comes with 4GB NAND flash and 1GB RAM by default, and adds an IR sensor, Audio In and Out, but the Olimex board supports LiPo batteries, and costs nearly $10 less ($49 vs $40).

@adem There’s been recent success in reverse-engineering the ‘CedarX’ VPU in the A10/A20 chips.

there is also this
http://imall.iteadstudio.com/itead-a10-core-1352.html