Many Android set-top boxes are based on application processors mainly targetting tablets such as Rockchip RK3188, and media capabilities including video quality, and audio pass-through are not always optimal, or not working at all. On the contrary, HiMedia Q5II, an Android 4.2 media player, is powered by HiSilicon 3718 (or is it Hislicon 3716C V200?), a dual core Cortex A9 SoC designed specifically for media players. It also features an external SATA slot, HDMI and composite video output, optical and coaxial S/PDIF, and I’ve just found out the company worked on making video hardware decoding work with XBMC. 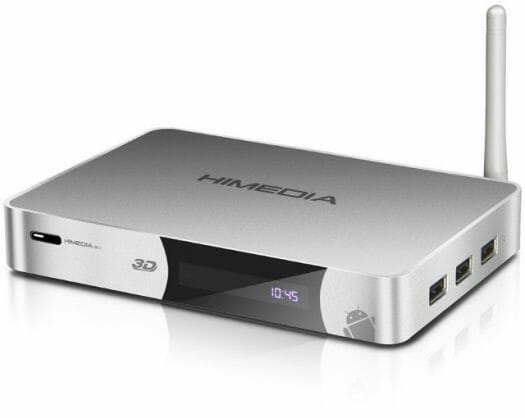 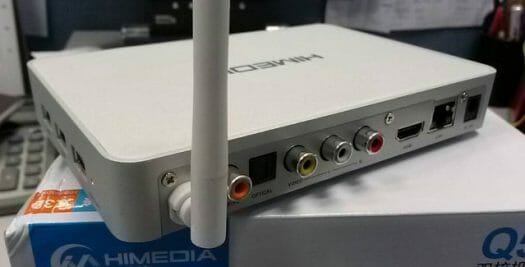 The device runs Android 4.2 with a custom user interface, but you can also switch the standard Android interface. The power is controlled by an MCU, which means the main SoC is turned off, or in deep sleep mode, while the player is in standby, which should result in lower standby power consumption. The company claims audio downmix and pass-through are both fully supported for Dolby TrueHD and DTS-HD MA (7.1)
lossless HD-Audio format, as well as DTS / Dolby Digital (5.1). The device come with a remote control, a power adapter, a SATA cable, an HDMI Cable, and a Quick Start Guide, which you can also download here. It shows how to connect the STB to your audio amplifier among other things.

HiMedia provides 2 applications to interact with their set-top boxes via your smartphone or android:

The video below filmed at the Hong Kong Electronic Fair by tablet republic shows XBMC with hardware video decoding running on the Q5 II.

The latest firmware for HiMedia Q5II is available from their website, and dates from the 23rd of October, and it may or may not include XBMC hardware decoding capability.

If the processor is indeed HiSilicon Hi3716C V200, it is supported by Linaro, or at least they work on it, so it might also be a fun platform to hack around, install Linux, or get the source code for the Android kernel.

The box has been released in September, and can be found in Aliexpress or W2COMP for $129.99, and Amazon for $154.99. Despite the extra features such SATA, Aluminum casing, 3D Blu-ray decoding, etc…, the device seems a little pricey compared to other dual core Android STBs on the market. Further details ar available in Chinglish on HiMedia Q5 II page.

Xbmc on linux or on android?

@pszab
That would be XBMC for Android.

It seems hardware accel is not enabled in their latest firmware: http://forum.xbmc.org/showthread.php?tid=175164

Nice but I noticed XBMC was running at 720p circa 50fps in the video, it looks like it doesn’t have the processing power to render the UI at 1080p native.

Not that they are the only one, a lot of Android boxes have low end GPUs so cant render XBMC UI at high resolution.

exciting info: they now use eMMC and the GPU is now quad core:
http://blog.minipcdb.com/himedia-q5-ii-upgraded/

Where and when are the selling the upgraded version with the new eMMC and quad core GPU?

looks like Himedia is working with Huawei on the next big thing already: http://blog.minipcdb.com/himedia-q5-4k-hisilicon-3798c-chipset/
I was waiting for a gigabit + USB3.0 STB