AllWinner A80 octa core big.LITTLE ARM Cortex A15/A7 SoC was announced as part of AllWinner Roadmap a couple of months ago, and one of the first devices based on the new processor will be Teclast T97 Air, an Android tablet with 9.7″, 2048×1536 display. 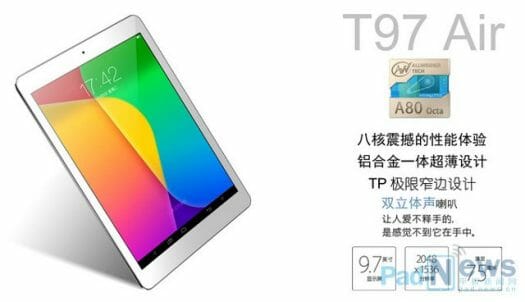 There are currently very few other details about the device, but we do know it will be extra slim with a thickness of just 7.5mm, and Edward Weinert reports the device is getting around 40,000 points in Antutu (if Google Translate Polish is right).

Teclast T97 Air will be available early 2014, and price has not been disclosed yet.

Will we be able to see an Android mini PC powered by this AllWinner A80 soon? And maybe with 3G RAM or more?

what is the gpu dont tell me powervr

@qwiqooq
Cortex A15 cores get pretty hot. So maybe not in an HDMI stick form factor, and in full sized media players possibly.

@adem
AFAIK, no info on GPU for now. But PowerVR has been losing marked share in the last year, so maybe Mali.

the only things most of these Chinese tablets are missing is 3G (not even dreaming about 4G) support. If it has 3G I will probably buy it!

@renw0rp Quite a few new ones with MTK chipsets have 3G support eg
http://dynamic.focalprice.com/CE0552B
(one of the first hits on a search for MTK8389 🙂

And Allfine Fine9 Glory 4G is announced on 15 december….