2014 could be the year where home automation becomes mainstream, as after Archos Connected Home, Samsung has now announced their own “Smart Home” service enabling users to control and manage their home devices, as well as Smart Home software Protocol (SHP) to enable connectivity between Smart Home products from Samsung and other manufacturers. 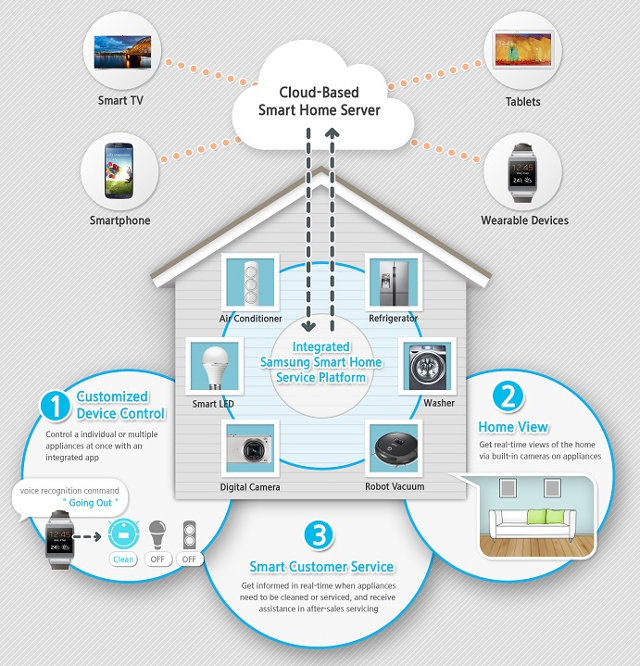 Your smartphone, smartwatch (Galaxy GEAR), or smart TV will be the control center of your home, and you’ll be able to manage refrigerators, washing machines, smart TVs, lights, and more. Communication between your phone and the appliance will go through the company’s cloud-based Smart Home Server.

At launch, Samsung will provide three main service features as shown in the illustration above:

The company also developed SHP (Smart Home software protocol) and hopes to gather industry interest so that smart appliances from multiple manufacturers become inter-operable. The API and documentation for SHP does not seem to be available just yet.

In the future, the system will include energy monitoring, secure home access, healthcare, and eco home applications developed by third-parties.

This type of system really look great when you think about convenience, and Samsung with its extensive home appliance offerings is probably one the best companies to make it happen, and do it right from a technical point of view. But with features like “cloud-based server”, “built-in camera” the system seems like an NSA dream come true, and if we are not vigilant, the story of 1984 book may become even more true than it is already today, except cameras are not forced upon us by dictators, but we are willing-fully accepting to be potentially spied on, even saying “just take my money”… Maybe it’s time for “reverse firewalls”, ones that control what goes out of our local networks.