During CES 2014 pre-opening keynote, Intel showcased a laptop capable of instantaneously switch between Windows and Android by the press of a button, and separately, AMD also announced dual OS support with Android and Windows 8 running simultaneously on a computer thanks to a version of Bluestacks optimized for AMD APUs.  So we can expect several hybrid laptop + tablet computers, let’s call it a “lapblet”, running Windows 8 and Android this year, and one of them is Asus Transformer Book Duet. 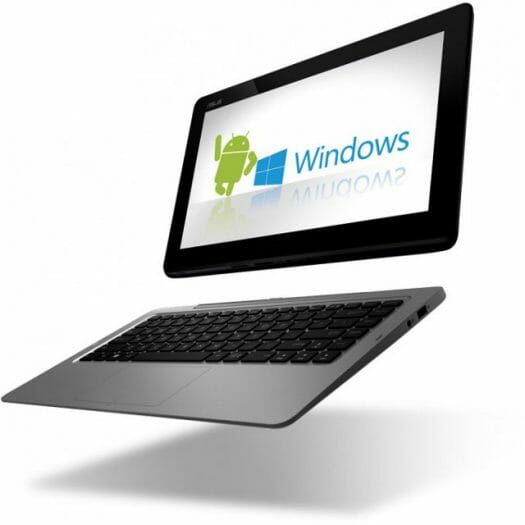 This computer runs Windows 8.1 and Android 4.2.2, and the company claims it can run faster than ARM based devices. Asus says it does not use OS virtualization, but I guess they mean it does not use a type 2 (hosted) hypervisor,  but instead a type 1 (baremetal) hypersivor.

Liliputing reports the price should be $599 once it become available, and has given it a quick try.

Based on comments on Liliputing’s post, both OS may not run simultaneously, and one OS hibernates while the other runs. So if your are in Windows start a task that takes time like a build, large file download or upload, video processing, etc.., you would not be able to switch to Android to play games for example, while the task completes.

so the touchscreen-keyboard-software still hasnt been optimised/fixed.
and a capable language only interface is still out of the universe after all these decades.

I wondered if which way AlwaysInnovating implemented that feature 3+ years ago on their vaporware tablet. There was even source at git-alwaysinnovating-com, but I never bothered to check…