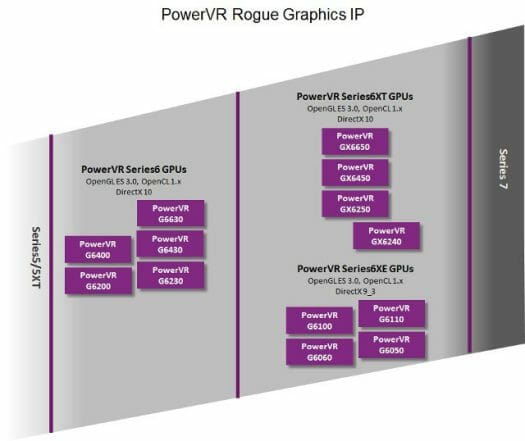 The new PowerVR Rogue GPUs will deliver the same fillrate performance as equivalent Series5XT multi-processor configurations but offer more in terms of features and functionality, including OpenGL ES 3.0, OpenCL 1.x, and DirectX 9.3.

Four entry-level GPUs have been introduced at CES 2014: 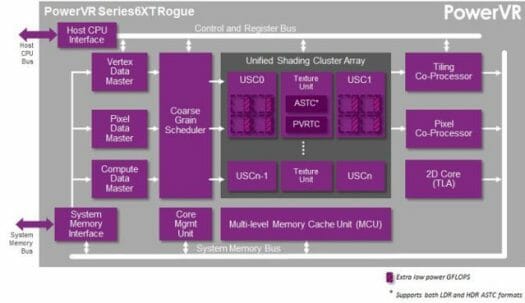 The company also announced Series6XT GPUs for high-end devices, providing a boost of up to 50% performance compared to Series6 GPUs (for same cluster / clock speed combination), with features such as PVR3C triple compression technologies, and UltraHD deep color GPU, as well as PowerGearing G6XT power management.

Four high-end GPUs have been introduced at CES 2014:

Anandtech has a nice performance comparison table with Seruies6 and Series6XT GPUs.

All eight GPUs are available now, and the company provides developers with free access to the PowerVR Graphics SDK available for Windows, Mac OS X, and Linux at www.powervrinsider.com. You may also want to check Imagination’s blog posts about Series6XE and Series6XT for further technical details.

I hate Imagination products. While with other companies there’s at least hope of some open source GPU driver with them there’s none.

Why not? Just start your hacking project like others did for other chips.

GX6650 happen to have 6 unified shading cores, with a total of 192 cores, just like the Kepler GPU in Tegra K1. It supports and OpenGL 3.x, whereas K1 support OpenGL 4.x.