Most of the time I feature low cost (Chinese) media players in this blog, but today I’ve had a look at a media player at the other side of the market that targets business users with applications such as webcasting and video sharing, digital signage, and business IPTV. Cisco Edge 340 digital media player (DMP) comes in two flavors “Wireless” and “non-wireless”, and boast features such as PoE or RS-232 which are not often found in consumer devices. 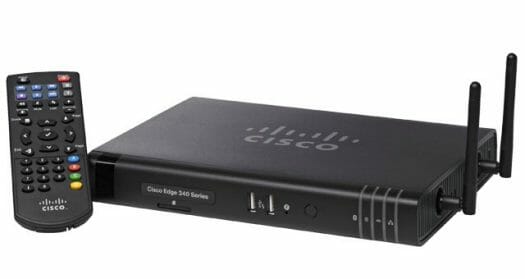 The device can be management via Local CLI (CLISH), a Web GUI, and HTTP API , and the company provides a 200-pages Software Configuration Guide to do so. SNMP is also supported for remote monitoring.

Estimated retail cost and ETA? Will it run XBMC too if it runs VLC?

My guess it that it is Intel CE5300 SoC series based platform.

If so it uses PowerVR SGX545 from Imagination Technologies.

PowerVR is infamous for closed source drivers and few updates.

Intel CE5335 looks to be the specific model of this 1.6GHz SoC

Intel only sold the software / application assist side of “Intel Media” to Verizon, not the hardware side.