FossilShale, an embedded company based in Bangalore, has announced a system-on-module based on Texas Instruments Davinci TMS320DM385 SoC that targets applications high-definition decoding and encoding (up to 1080p60) such as IP Cameras, HD video conferencing endpoints, digital signage, portable medical imaging and diagnostics, or camcorders. It can be used standalone for evaluation, or with a carrier board. 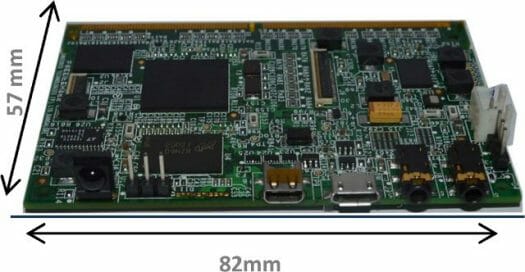 The company provides Texas Instruments Linux PSP (Platform Support Package) with customized Drivers and BSP, as well as sample applications. Three boards are available to interface with the SoM:

as well as a carrier board including 2 Gigabit Ethernet ports, 2 SATA connectors, up to 4 USB host port, a mini PCIe slot, a parallel camera input, headers for GPIOs, I2C, SPI, 30-bit digital video output, and 16-bit digital video input, an optional Wi-Link 7.0 Module, and a few other I/O as shown on the block diagram below.

The company did not disclosed pricing, but we do know FS-DM385-SOM will be available for purchase on July 01, 2013. Further information is available on FossilShale SOM page (FS-DM385-SOM is the first and only module).