The Gizmo Explorer Kit is an embedded kit based on a development board powered by AMD G-Series G-T40E dual core APU that’s available since the beginning of the year. The Minnowboard is another new x86 embedded board, but this time based on Intel Atom E640 processor. Both cost $199, so a side-by-side comparison might be useful,and GizmoSphere team released a comparison table for both board, and is offering free shipping for the week with “Sharkweek2013”. Let’s have a look. 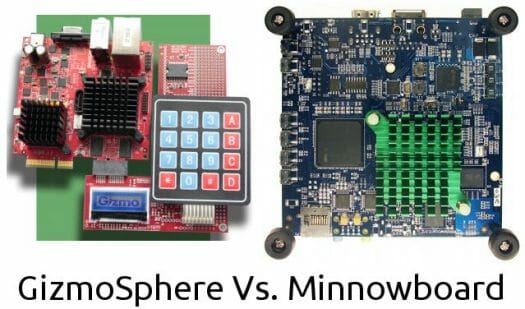 The company only provided the table in image format, so I’ll reproduce it “as is” below, and see if there may be some correction or addition afterwards, the table has been designed by one of the competitors. The parts in yellow are supposed to highlight advantages of the GizmoShpere against the Minnowboard, [Update 13/08/2013 – Gizmo guys have updated their table (shown below) based on feedback, and added green highlights when Minnowboard has better features. You can still download the original comparison table that generated a lot of comments]. 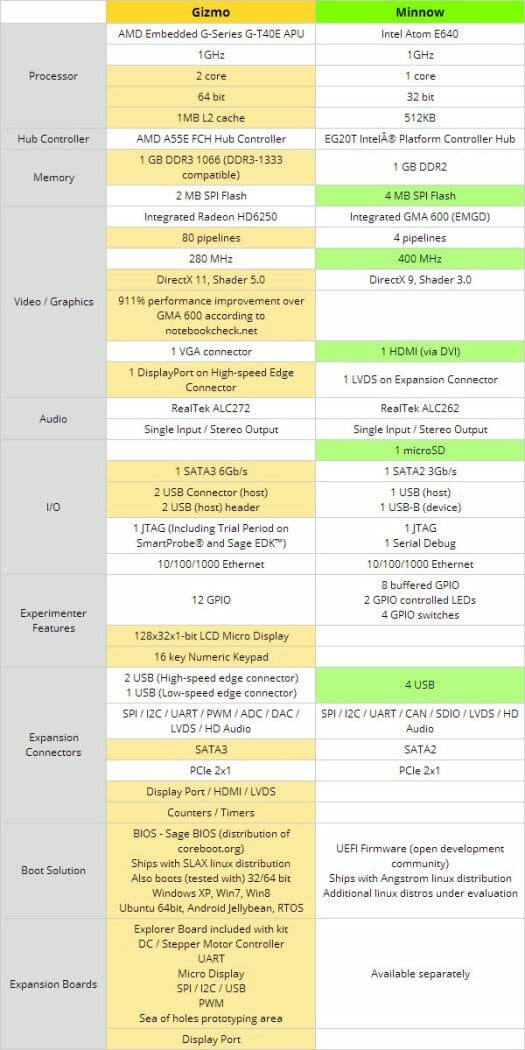 Overall the comparison seems fair, with both boards having some advantages, and overall I still find the GizmoSphere kit may have better hardware in terms of performance and I/O ports, although as usual for embedded boards, it really depends what you want to do with the board.

However, the table may still need some corrections including:

One advantage of the Minnowboard over the GizmoSphere is that it’s fully open source hardware (They’ve uploaded the schematics, BoM, layout and gerber files yesterday), whereas you’ll “only” find the schematics (PDF) available for the GizmoSphere board. They’ve however promised to “roll out additional assets in the future as they become available, including the Gerber format files and Bill of Materials (BOM) for the Gizmo board.” Open source hardware is mainly an advantage if you plan to design your own custom board based on the original design. [Update 13/08: Gizmosphere has followed suit, and has now released hardware design files for the Gizmo board including the Bill of materials (BoM), the Gerber files, and latest schematics (PDF and DSN)]

just FYI, i have already pointed out that the table that the gizmoboard folks provided is full of inaccurate data… 1) the Minnow has a second display via LVDS on the expansion header (“no second video” listing) 2) the Gizmo has 2 usb host connectors on board, but if you want to add the two additional ports you have to purchase an adapter to plug into the header. (not 4 as is listed) 3) the Gizmo ships with JTAG support, BUT only with a 30 day license (check the Gizmo FAQ page) 4) Minnow does have a JTAG header which… Read more »

Seems to me not to be an unbiased comparison.

What really made me chuckle though was that not having a microSD slot is considered to be a benefit for ginger.

BTW I have no opinion on which of the boards is better, probably it depends on what you need and want to do with it, but I would have expected cnx to be a little bit more critical.

@FransM
Sorry, I got a little lazy here. If the table had been in text format it would have been a little easier to correct mistakes.

Mr. Anders, don’t you have anything better to do than slam anyone one who comes out in favor of Gizmo. How about a little full disclosure that you work for Circuitco the manufacturer of Minnowboard, you are not exactly unbiased. Neither am I, for my own disclosure, I work for SemiconductorStore.com, the distributor of the Gizmo Explorer kit and Gizmo board. We put together the compare chart based on the information provided on the minnow.org page. We are by no means experts on the Minnow product and are reviewing the chart to include some features that the Minnow gurus have… Read more »

@David Anders I think cnxsoft have done a pretty fair comparison here given the limitations of data availability. Given the status of the products as they ship from the supplier. Yes – you can buy add-on boards, and adapters, but you can do the same with Gizmo – including stuff like that makes it difficult to draw the line anywhere. You can buy an HDMI monitor for Gizmo for example, but I don’t think it should be shown in this comparison 🙂 In my opinion the important factors to take into consideration are (1) CPU processing power, (2) graphics processing… Read more »

Patty – if you click on my name as part of the post it takes you right to circuitco website. i have never denied or stated otherwise. my point is that cnx-software.com simply took the chart from SemiconductorStore.com without contacting circuitco or minnowboard.org to verify the validity of the information: good reporting requires good vetting of facts…. The FULL release of the MinnowBoard design files under creative commons license seems to have hit a nerve for SemiconductorStore.com as well since they have been forced to release all of their design files six months after the gizmo was released. of course… Read more »

As a simple desktop computer user (well with 3 PCs not that simple anyway) who has NO experience with embedded systems I would say that Gizmo looks better as a hardware. Reading the article I was thinking that, in the end, the author was trying to close the gap between Gizmo and Minnowboard. Now I am reading he was trying to favor Gizmo. But I never noticed the highlighting, that yellow color, really. Who cares about colors when he can read the specs? Looking for example at I/O and reading “1 microSD” for Minnowboard and nothing for Gizmo, who really… Read more »