Meet ButtonDuino yet another tiny, and cheap, Arduino compatible board. The board is breadboard mountable, measures just 18.64 mm x 18.25 mm, and sells for $10 (beta) and up, not including shipping. 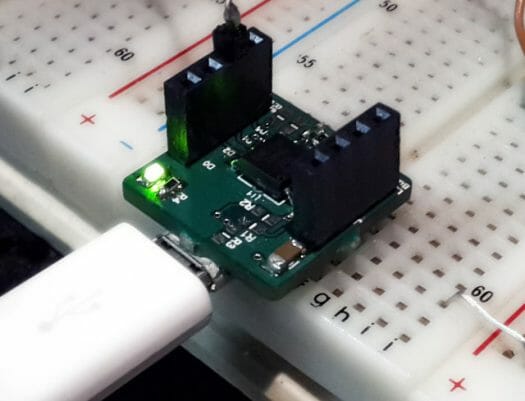 The board is programmable via USB or AVR mkII, is compatible with Arduino IDE version 1.0 or greater in Windows, OSX and Linux,  and supports NI LabVIEW. ButtonDuino’s schematics, code and bootloaders will be released once the product development is completed.

Lumina Inova is also working on ButtonShields, stackable expansion boards for the ButtonDuino, and the design for 5 has mostly been completed (schematics + PCB layout): I2C Port Expander, I2C temperature sensor, RGB LED, coin battery pack, and 3-axis digital compass. The company is also planning lots of other shields to add support for a Real-time clock, Bluetooth low energy, Wi-Fi, relays, and so on.

The developers are now looking for funds ($4,500) via a flexible funding Indiegogo campaign to start manufacturing. The cheapest pledge is $10 for a beta version of the ButtonDuino that you should somehow receive in May (before the campaign is close?!). If you want a fully tested product you can pledge $11 to hopefully get it in July or August. There are different pledges depending on the ordered quantity, but none of the ButtonShields have been added as perks. Shipping is $5 for South Africa, and $6.60 for the rest of the world. both including a tracking code.