Yesterday, I wrote about Banana Pi, an AllWinner A20 powered development board that’s mechanically and electrically compatible with the Raspberry Pi so that you can keep using your existing R-Pi accessories. It turns out another company is working on a similar concept. Solidrun who has brought us Cubox and Cubox-i in the past, will soon launch HummingBoard, a Raspberry Pi compatible board powered by Freescale i.MX6 solo/dual/quad SoC, bring even more power than the AllWinner A20 dual core Cortex A7 SoC found in the Banana Pi. 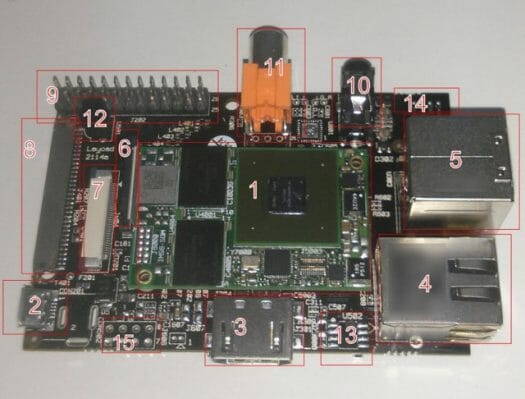 The HummingBoard, previously known as Carrier One, is composed of a baseboard and SolidRun microSOM (micro System-on-Module) have comes with the followings specifications:

The microSOM features i.MX 6Q SoC, 2GB RAM, Gigabit Ethernet PHY and BCM4329 Wi-Fi + BT module, and there may be different microSOM configurations, so these may end up being optional. You’ll lose one feature from the Raspberry Pi: composite video output, which has been replaced with coaxial S/PDIF. All other hardware features appear to be present with faster hardware. You’ll gain a much faster CPU, 2GB RAM, Gigabit Ethernet, Wi-Fi and Bluetooth,SPDIF, an IR receiver, and a RTC. As with the Banana Pi, not all Raspberry Pi accessories, such as the camera, will work out of the box, as there’s some serious work to make them compatible. But enclosures should be re-usable, and most boards that simply connect via the 26-pin connector should work with just a little bit of work.

The good news is that software made for the Cubox-i will be compatible with HummingBoard, so various Linux distributions (Arch Linux ARM, Debian, Ubuntu, etc..), Android, and XBMC (Linux) should pretty much work out of the box. You can find some details about the hardware on the Wiki.

The board are not available yet, and pricing has not been announced either.  However, I’d expect the launch to take place some time in May, as the company is launching a competition to give away HummingBoards to the 30 best projects using the Cubox (or Cubox-i). You’ll need a 90-minutes (max) video demonstrating your project, and submit it before the 25th of April to get a chance to win. Winners will be notified on May 10.

it’s interesting, I checked its website and after 10 minutes I still could not find out where this company is? where is it? why is this a secret.

based on http://www.solid-run.com/terms-of-use (10.7 Applicable Laws) I would say Israel

It used to mention they were Israeli – maybe that attracted hackers? (Kind of ironic because it looks like some of the senior people are Arab-Israeli…)

It is an Israeli company, they have never made a secret of it.

Their Cubox-i product is good hardware, I have one, but the company is relying heavily on the “community” (online forum members) for support. The company does not update its blog or wiki frequently. It is not obvious how and where to get OS images that work well with the Cubox-i. I think they are still just trying to get out from under the large crush of orders.

as the hardware is very similar to the cubox-i4Pro, it would be a good guess to think it will cost around $130.

First-generation CuBox that used an ARM SoC from Marvell had very poor support from SolidRun as a company and instead practically only relied on community, which was very small for that first-generation, but CuBox-i does have a little better support but that is still mostly due to community since it is based on the Freescale i.MX6 platform which have great support by other. I would say that SolidRun as a company have at least in the past been just as horrible as most Chinese fly-by companies who make Android media players based on Allwinner and Rockchip ARM SoCs, so while… Read more »

They allready have a nice product (cubox-i – I don’t own it) “2x2x2 inch cube” so what is going on with this RPI like format? Are they going to discontinue the cubox-i line?
The folks at wandboard are advancing slowly ….
Hope to see in the near future more stable and more features on linux arm boards.(Still waiting for hw accelerated 1080p video decoding on LinuxARM (RPI not included))