CircuitCo has just introduced BlueSteel-Basic, a development board based on the Beaglebone Black but with a Blue PCB, no HDMI output, and no eMMC flash that’s destined to be used by OEMs in their products. LinuxGizmos also reports that BlueSteel-Basic is to be followed by BlueSteel-IT, an industrial temperature grade (-40 to 100°C) board based on the Beaglebone Black, and Bluesteel-Core, a computer-on-module (CoM) based on Ti Sitara AM335x that are scheduled for July 2014. 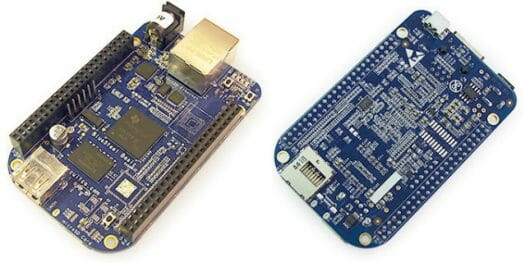 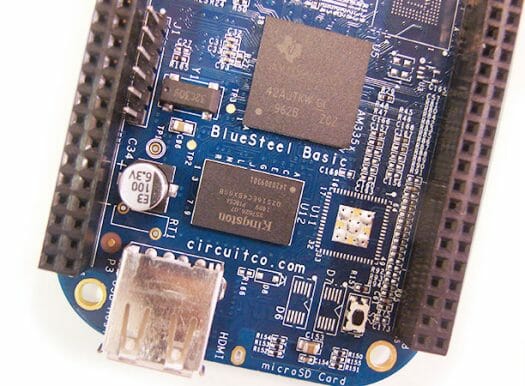 And if you’d like to get a clearer picture of the differences between BeagleBone, BeagleBone Black and BlueSteel-Basic, there’s a table that for that!

Just like the BeagleBones, BlueSteel-Basic will be open source hardware simply because it’s exactly the same as the BeagleBone Black, but without the components required for HDMI and eMMC flash. That also means the capes, Beaglebone’s expansion boards, will be supported. The board will also leverage all the software brought to the the BeagleBone Black with support for Debian and Angstrom, but also Android, Gentoo, ArchLinux ARM, Minix, and more. You can find more technical details on BlueSteel-Basic Wiki.

BlueSteel-Basic will cost the same as BeagleBone Black Rev C, that is $55 and start shipping on June 30. You can pre-order BlueSteel-Basic on Boardzoo.

Fix the pre-order link at the end.

“BlueSteel-Basic will cost the same as BeagleBone Black Rev C”
I don’t see any benefit to this board over the BBB-C???

@Joe joe, the benefits are: * no restrictions on commercial usage * volume price discounts * all I/O is available on the expansion header as an OEM/ODM developer, the BeagleBone Black present a great starting point, however it does present a number of obstacles, in that BeagleBoard.org has significant restrictions on the use of the BeagleBoard logo. In addition, there a limited set of authorized distributors who can sell BeagleBone Black, and are limited in the number of boards they can sell to a single customer. Another aspect is that most OEM/ODM developers who are including the BeagleBone Black (in… Read more »

@Joe
Benefit is that, since it costs less to produce, maybe they are not loosing money for every unit shipped. Hence they will deliver as many as you want.

@predielis BBB does have commercial use restrictions, as i linked earlier. you can use the BBB for whatever you want, however, the limitations are that you may not qualify for RMA/Warranty, you can not use the BeagleBoard name as part of the project(without approval), in addition you are not guaranteed functionality or availability. as for the signals, the difference between BlueSteel and BBB are that ALL of the signals on the expansion headers are usable. on the BBB the signals used for eMMC and HDMI create a major muxing issue for those signals on the expansion headers. it is virtually… Read more »

@predielis
sorry i thought i linked to it in my original post:

@David Anders You do know that HDMI and eMMC pins can be accessed by configuring the uBoot boot loader right? Many of the pins I need for the two peripheral PRUs conflict with HDMI so what I do is simply include “optargs=capemgr.disable_partno=BB-BONELT-HDMI,BB-BONELT-HDMIN,BB-BONE-EMMC-2G” in the /boot/uboot/uEnv.txt file – of course, I would need to boot from the SD card from then on without the ‘BB-BONE-EMMC-2G’ overlay but I also gain access to ALL pins as well. The advantage(s) I see, besides the amazing tint of blue, is availability and no commercial barriers. The disadvantage then would be that one would always… Read more »

So is this dead, or still moving forward? definitely interested in having a conversation.

@Brad Nicholas
The order page is gone, as is all documentation on eLinux.org, so it may have been scrapped…

@Brad Nicholas and cnxsoft: That’s unfortunate. I’d jump on this.