ITEAD Studio IBOX is a mini computer powered by AllWinner A20 dual core Cortex A7 processor with 1GB RAM and 4GB Flash, a few USB connectors, Ethernet and video/audio connector. This mini pc can run both Android & Linux, and features a 32-pin connector that allows to connect expansion boards. 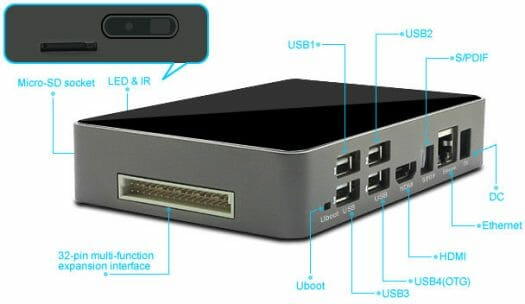 Let’s have a look at the specifications:

The company provides image with Android and Linux images for NAND and SD Card made by themselves (Android TV A20, Debian 7.0), as well as those made by Cubietech (Android 4.2, Lubuntu, Cubian), ArchLinux ARM, and LinkSprite (Android).

ITEAD Studio shows several pictures of IBOX with expansion boards (as above) but all these seem to be photoshopped, and they explain customers have to create the expansion board yourself, as they don’t have the resources. The hardware inside is composed of a baseboard and a computer-on-module, and schematics (PDF) are available for both, and full hardware design files available for the baseboard.

The company has made an habit of launching their products on Indiegogo, and this time again, IBOX is featured in an Indiegogo campaign where you can get the board for $70 including free shipping.

I boycott anything A10 or A20 SoC based since Allwinner as a company is so very much anti-FOSS, even if they still don’t realize that themselves.

Only if and when Allwinner learn and release their code with proper open source license then I will change my mind.

Harley :
I boycott anything A10 or A20 SoC based since Allwinner as a company is so very much anti-FOSS, even if they still don’t realize that themselves.
Only if and when Allwinner learn and release their code with proper open source license then I will change my mind.

The worst thing is that other vendors, except Freescale which is embedded oriented, are worse.

Does this have any advantages over A20 Cubieboards? Which at least have a bit of a community already…

SATA has to come out the expansion header, which makes it a clumsy solution for anything involving a HDD.

No sign of the elusive CANBUS…is there a single A10 or A20 product anywhere that has implemented it?

@onebir
They can use Cubieboard A20 image, so it’s probably software compatible, unless they made some changes to the images.

@wycx
I’ve read Tom Cubie that said that even though there was a CAN bus in the SoC, AllWinner never enabled it. That was maybe one year ago.

There is some mention of the CAN interface on Linux Sunxi Mainline effort page which links to a page that links to this thread [1] which has some documentation.

It is strange they woudl not enable it since it is on the silicon and that silicon costs money.

@wycx
There is an expansion board that accommodates SATA. There’s a picture of the board with a SATA drive on this page:

I’m not sure if this is the expansion boar that comes with the IBOX on the Indiegogo campaign though, I need to read it over.

@David
Nice, it’s really not clear from their Indiegogo page… But the update is:

“All the backers will receive an IBOX together with an add-on board that can be plugged in 32pin expansion interface of IBOX. The add-on board only makes a simple extension of the interfaces including:

They also sell the 32-pin connector for those who want to make there own expansion board: http://imall.iteadstudio.com/electronic-components/connectors/connector-socket/9001-9001-38xx-din-41612-half-q-type-female-connector-socket.html

They should really have mentioned that, it makes the whole thing more interesting, including price-wise.

I would not recommend one of these as a media player until after upstream mainline XBMC get official support hardware video acceleration of Allwinner A10 or A20 SoC series CedarX VPU.

So if and when, as of right now there are no guarantees that they will ever be supported.