ARMv8 (64-bit ARM) architecture has been seen in servers, and announced in mobile SoCs, but, putting aside some Apple products, we have yet to see any consumer products based on the latest ARM architecture. But this will change soon, as HTC Volantis, which could become Google Nexus 9 based on the picture leaked via Android Police, will feature an “Nvidia Logan 64-bit” SoC, which can only be a Tegra K1 dual core ARMv8 SoC announced at CES 2014. 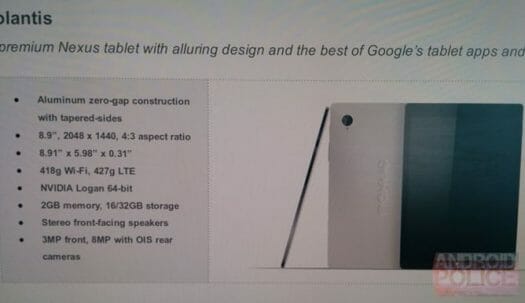 The assumption is that it will be released as the latest major release of Android (with a codename starting with L) is announced, hmmm, let’s make that Android 5.0 Lollipop sponsored by Chupa Chups. :).

Android Police also got some pricing information with the tablet selling for $399 for the 16GB version, and $499 for the 32GB version. These numbers should be taken with a grain of salt however, as the product is expected to be release in Q4 2014, and pricing may well have changed by then.

Too heavy. Give me something like the LG G Pad instead…

Ah, so finally Denver has or will arrive(d)? Good!