The Raspberry Pi foundation announced a computer-on-module which they called the (Raspberry Pi) Compute Module that will be mostly software compatible with the Raspberry Pi board, and sell for $30 in quantities. They have now announced the availability of the development kit that includes a baseboard (called Compute IO board), display & camera adapter boards, as well as a 5V power adapter, jumper wires, and a USB cable.

As a reminder the Compute Module has the following hardware specifications:

The Compute IO Board come with two micro USB connectors (one reserved for power), a USB 2.0 host port, two DSI ports for display, two CSI ports for a camera, a full size HDMI port, headers for various IOs, and a SO-DIMM socket to insert the Compute Module. Both the Compute Module and IO board are FCC certified, but apparently no CE (yet?), which will allow them to be included in products to be sold in the US. 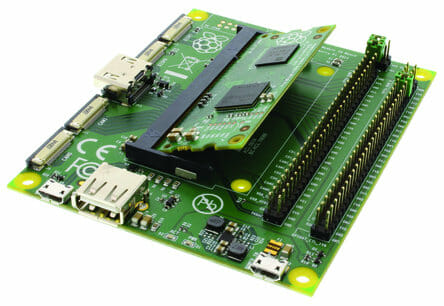 The schematics are provided in PDF format for all three boards: compute module, IO board, and camera and display adapter, as well as a hardware design guide, and instructions to flash the board’s eMMC and play with the Raspberry Pi camera module can be downloaded from Raspberry Pi Compute Module documentation page. It seems a little odd they did not release the IO board schematics in the original to let developer modify to their needs.

Currently, the Compute Module only supports Raspbian for now, and anything that can be done on the Raspberry Pi should also be achievable with the CoM, but new capabilities like dual displays or dual cameras won’t work out of the box right now.

Raspberry Pi Compute Module has been designed for people wanting to make products, so low price has not been a focus for the development kit, which can be purchased for about $200 via RS Component or Element14.

There is already project based on this module called ‘Modberry 500’
http://linuxgizmos.com/automation-controller-taps-raspberry-pi-compute-module/

And there’s now another option for the baseboard with GeekRoo CoMo – https://www.kickstarter.com/projects/geekroo/como-booster-launch-your-raspberry-pi-compute-modu?ref=discovery

It costs just below $100 for the motherboard, and the total kit is about $130. It has some interesting features like support for 6 to 23V power input, Lithium battery support, built-in RTC, built-in Wi-Fi, a small OLED display…