In case you find four cores are not quite enough, but eight cores are just too many, Mediatek added MT6591 hexa core processor to its roadmap, and the first phones are starting to be up for pre-order. iNew V8 is an hexa core smartphone with a 5.5″ display, 1GB RAM, 16 GB flash, and an interesting camera that can rotate by up to 210 degrees, and can be used both as a rear and front facing camera. So no more low quality selfies at 2MP, and welcome to 13MP selfies with flash! 🙂 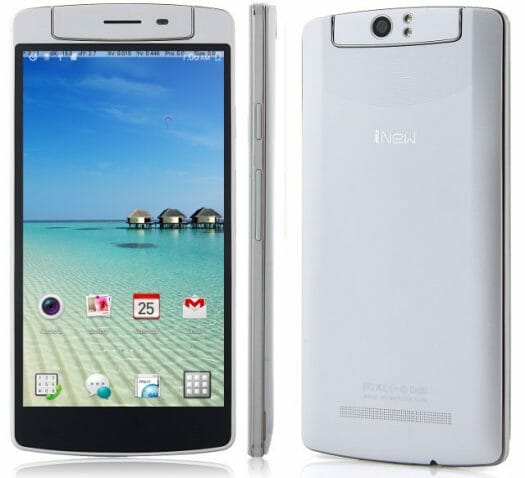 The phone runs Android 4.4.2, and ships with a 2,400mAh battery, a USB cable, a screen protector, a charger, and multilingual user’s manual. Pandawill has a video where they show different capabilities of the phone including the rotating camera.

The phone is now available for pre-order, and is expected to ship around mid July. I first got tipped about it by GearBest where they sell it for $250, but it can also be found on Aliexpress and Pandawill for the same price.