Mediatek MT6572 is a new dual core Cortex A7 processor with a Mali-400 GPU, as well as a HSPA+/TD-SCDMA modem. This SoC announced last month, is now starting to show up in low cost smartphones such as Cubot GT72. The phone is said to run Android 4.2.2, comes with a 4″ display, and 256MB RAM, and 512MB flash. 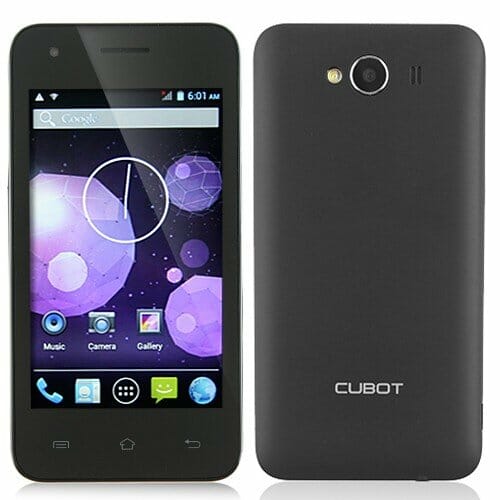 Here are the specifications of this phone:

Cube GT72 comes with one battery, a USB cable, a charger, and a user’s manual. That’s a lot of features for such a cheap device, too bad most of them will probably be unusable with 256 MB RAM, and 512 MB flash. If it is there, Google Play will be useless, as you won’t have enough space to install anything.

The “Android 4.2” claim is probably bogus, or they must have done lots of “optimizations” and feature cutting, but most probably the device just runs an earlier version (Android 2.3?). You may be interested in Android 4.2 minimum hardware requirements (for Google certification?) for memory and storage, according to sections 7.6.1 and 7.6.2 of Android 4.2 Compatibility Definition:

Device implementations MUST have at least 340MB of memory available to the kernel and userspace. The 340MB MUST be in addition to any memory dedicated to hardware components such as radio, video, and so on that is not under the kernel’s control.

Device implementations MUST have at least 350MB of non-volatile storage available for application private data. That is, the /data partition MUST be at least 350MB.

The device does not meet any of the three requirements above.

The device is available for pre-order for just under $70 on Focalprice, Pandawill, GeekBuying, and probably a few other websites.

Cripple a decent processor with inadequate memory, and (probably) lie about the Android version… way to go Cubot!

instead of $70, make it $75 or 80 and add the missing memory, else you’re shooting yourself in the foot.

I have a Motorola Milestone and can tell you that even GingerBread has trouble in 256MB of RAM.

I wonder if they’re pulling some tricks with compcache and/or swap to get the effective amount of memory up.

Luckily there will be some other phones based on MTK6572 with more RAM and better screens:

I’ll have to agree with everyone else here. This is a crappy phone to say the least and is obviously geared toward the low-end market. With all of the other phones available out there at a slightly higher price point. MTK6577 dual core phones can be purchased as low as $100USD.

I have little use for a mobile phone, but when dual core (eg SC6825/8825) hits this price point, I might get one, if there’s some crappiness factor I’ve missed here :p

@onebir
At least it should be usable. I’ve also seen some Android phones on dx.com in the low $50 for a little while, but they usually run Android 2.3.x.

@onebir
SC6820 phone usually run a modified Android 2.3. The ones that have 256 MB of RAM do so for sure. There may be some rare cases in which they do have 512 MB of RAM and Android 4.x but I doubt it.
It’s highly likely that both the RAM and the Android version is fake, they need to keep the cost down

@Marius
Thanks for the info. Looks like a bit longer to wait then 🙂