Mediatek already has over a dozen of dual, quad and octa processors for smartphone and tablets based on ARM Cortex A7, A9 and A15 cores, and they’ve already announced a 64-Bit ARM SoC (MT6732) as well as MT6595 with four Cortex A17 cores. A leaked product roadmap show the timeline for Mediatek smartphone SoCs, as well as showing some new application processors such as MT6591 Hexa-core SoC, MT6571 dual core Cortex A7 and MT6752 octa core Cortex A53 with LTE. 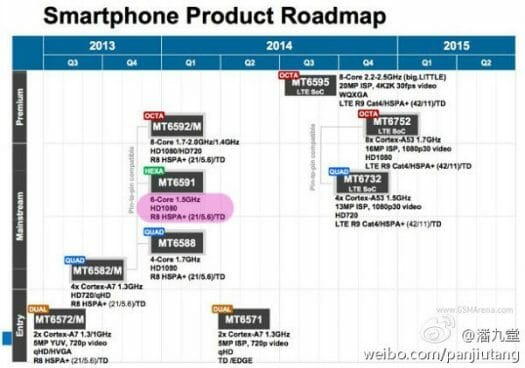 So let’s recapitulate the new and upcoming SoCs from Mediatek:

I can’t really understand Mediatek’s naming convention, and why they need so many different SoCs, but apparently it’s working for them.

Via Gadgetoadicto and GSM Arena.

I do wonder if their A53 based SOCs will be able to use the universal ARM kernel, that would be a really big step forward indeed as it would mean we wouldn’t need the kernel sources for all these Chinese phones.

@zoobab
They do of course but good luck getting one unless you’ve got a company and the cash to buy it.