Prices for Android TV boxes based on Rockchip RK3188 are getting ridiculously low, probably because some people are getting rid off stocks. After MK918 that sells for about $50 , MK813 is another quad core Android media player with 1 to 2 GB RAM, 8GB flash, and a 2MP camera that you can buy for $46.80 on Aliexpress (1GB RAM) from a seller with decent feedback, and that includes shipping. The 2GB RAM version sells for $51.32. 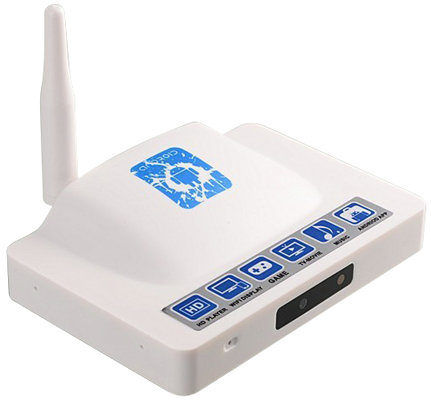 The box runs Android 4.2.2, and ships with an HDMI Cable, a power adapter with a USB cable. The firmware image (November 2013) is available for download according to some Freaktab users. One important features commonly found on Android TV Boxes is lacking: Ethernet. Compared to MK918 which can be found for a few dollars more, MK813 also lacks an IR receiver, so it’s not shipped with an IR remote control, not can it support one, there’s no optical S/PDIF audio output, and Bluetooth is limited to version 2.1. However, it adds a camera and features a micro USB OTG port.

I could only find one seller on Aliexpress that provides the box for about $50, and others sell it for $60 to $80, as do DealExtreme and GeekBuying.

Sadly the RK3188 tablets are holding their prices much better 🙁

@onebir I’ve seen one for $85 🙂 discounted JXD or something like that.

Is it still true, that to use 1080p resolution in apps and games, special 1080p ROM is needed?

@riklaunim
Maybe 7″ ones are getting cheap; I was hoping prices for iFive Mini 3 would drop when the 3G & RK3288 versions came out. Instead, those were more expensive! :p

onebir :
@riklaunim
Maybe 7″ ones are getting cheap; I was hoping prices for iFive Mini 3 would drop when the 3G & RK3288 versions came out. Instead, those were more expensive! :p

I guess for those, the SoC is a relatively small part of the BoM so they dont budge as much…