Beelink A9, soon to be sold as Tronsmart A928 or Zero Devices Z6C, is a yet another RK3188 box with 2GB RAM, and 8GB Flash running Android 4.2, upgradeable to Android 4.4.2, and if it was not one of the four devices with Android 4.4.2 SDK I may not have decided to write about it. But since it should be more easily hackable with the SDK release, although with caveats, it becomes much more interesting. 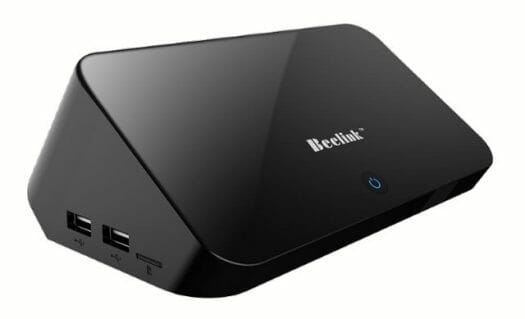 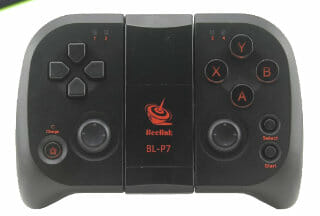 The eMMC flash is said to allow for 17MB/s write speed, and 300MB/s read speed, the firmware supports 720p webcam, and OTA updates (I’d assume if the reseller enables it ). The company can also provide BL-P7 gamepad (pictured on the right) with the box, compatible with over 400 games, but the look is quite different from Z6C game controller.

Standard accessories provided with the device include an HDMI cable, an AV cable, a power supply, and an IR remote.

The device is not available right now for retail, and price has not been disclosed, although for reference only, Tronsmart A928 showed up shortly for $92.99 before being removed from GeekBuying website. There’s no product page on Shenzhen AW Technology / Beelink website, but you can download A9 user’s manual.

There’s one caveat to the SDK release. As pointed out by one reader, the firmware is still using Linux 3.0.36 which means some of the new features introduced in Android 4.3 and 4.4 such as Bluetooth LE, and printing may not work. I’ve just read on MINIX Facebook page, that MINIX does not intend to release Android 4.4.2 with Linux 3.0.x, and instead is waiting for a proper SDK for Android boxes with an upgraded kernel that will better support Android 4.4, and be available at the end of February, so Android 4.4 firmware should be available in March or April.

I see some strange movements around this… and most of them I really don’t like. Z6C was announced to run 4.4.2 but it has not been launched yet, also I see some people “on the shadow” copying ZERO Devices Z6C project step by step. I’m wondering if the others DO NOT HAVE THEIR OWN IDEAS or what.

…and the reply from Minix… because they don’t have “the tools from Rockchip” are calling “FAKE” all the others? So they are GOD.

@Javi or maybe its just another reference design sold to many peoples as it often happens in china.

I know what I said on my first post better than anybody, you can believe me…

Also you know my ONLY critique to MINIX (second post) was because not enough specific about WHO launched that fake (or hybrid) version.

Javi :
@nixzero
I know what I said on my first post better than anybody, you can believe me…

yeah, I know that you are the guy who’s spamming about z6c everywhere, noo need to insist.

Also you know my ONLY critique to MINIX (second post) was because not enough specific about WHO launched that fake (or hybrid) version.

minix is a bit fixated about using the tv/box version of sdk even when the tablet one is better but what they said about the kernel has some thruth – that kernel is an abhomination, it should be burned with fire.

This is the world of ODM.

Geek was the first to show this model, then zero and now beelink is the ODM.

Im done buying off brand android devices to many fail to reach any real quality.

MINiX i have a 3188 model and its dead returned and got another but its starting to fail also with no video after 1hr of use.

Interestingly, SHENZHEN AZW TECHNOLOGY CO.,LTD (see http://www.bee-link.com/en/article.php?id=9) is also known as NETXEON (SHENZHEN NETXEON TECHNOLOGY CO.,LTD – see http://www.netxeon.com/en/article.php?id=9) who are a partner of Rockchip (see http://www.rock-chips.com/a/en/About_Rockchip/Partners/index-136-1.html) and Rockchip refer all GPL requests for source code to be sent to their partners “who will serve you wholeheartedly”. So ‘fake’ maybe a bit misleading here given that all these companies have blurred the very loose relationship between Android release, SDK version, Android and Linux kernel versions coupled with their own incorporated hacks which when compared with the real-life dilemma of what is a true Kit Kat (Nestle or Hershey) show that… Read more »

First you call everybody FAKES (except you) and now call me SPAMMER, ok, now it’s confirmed, MINIX is GOD and also the best Rockchip partner, of course better than Netxeon… (who is a new partner of AMLOGIC too).

I suggest you read a little more about where ZERO Devices was named, when and why, later you can open your mouth and insult again!

cnxsoft : It can also be found as Jesurun H86 – http://www.ahappydeal.com/product-170188.html @Jean-Luc Aufranc (CNXSoft) when I said that about “copy ZERO Devices” I was not talking about its case or motherboard, but something more like… “general product idea”. That comment was wrote to “touch” someone (just a reader) about my disappoint. As I’m working together with NETXEON and AZW my message has sense (to those who could understand). About MINIX, I just did not like the word “fake” talking about another brands, and I read anothers who also think same than me. Just an opinion. I never had any… Read more »

@Javi
Sorry, I did not mean to throw gasoline into the fire, but I usually post different product names in comments, and I did the same in this post. Since the discussion started to get a little heated, putting a “disclaimer” before and after my link to happydeal may have been a good idea.

Javi : @nixzero First you call everybody FAKES (except you) and now call me SPAMMER, ok, now it’s confirmed, MINIX is GOD and also the best Rockchip partner, of course better than Netxeon… (who is a new partner of AMLOGIC too). I suggest you read a little more about where ZERO Devices was named, when and why, later you can open your mouth and insult again! a bit touchy are we? I never called you fake, you said that minix defined the 3.0.36 kernel a fake but A) that’s minix, I dont even own a minix product, why should I… Read more »

Ok, I start again… 1) I talked about “copy”, I said that to another people, not to all of you. To some ones who are just readers. They know, I know, enough. 2) I did not like a brand call “fake” anothers, few ones announced 4.4 these days and some can think all of them are trying to cheat customers. I’m not the only one who think this, you can read MINIX facebook, freaktab and all those sites you said. Lot’s of people not agree, includding Finless who revised this very well. I’m not just a seller, and OF COURSE… Read more »

The reason why we (together with Netxeon) can build the 4.4.2 version before them is because we are in the position of ROCKCHIP PARTNER:

You will not find any MINIX (from J&W) there

This is a small video about Z6C running 4.4.2 (BETA firmware) and using the new native PRINT feature:

ok guys and girls just a QUICK QUESTION i am considering an a9 geekbuying got for $99.07 aus that comes with a remote which is about $40 cheaper then minix x7 what do you guys think which is better and the external antenna that the minix x7 has does it necessarily mean better wifi also x7 has 16gb rom compared to 8 also support will there be support for the a9

Having said that, $99 for an RK3188 box with an air mouse looks like a good deal.
Beelink told me they’d sent me one, not sure with air mouse or not, but I’ll review it when/if I receive it.

@Jean-Luc Aufranc (CNXSoft) i had a look at freaktab and some one asked the Question a9 or minix neo x7 and finless bob answered that tronsmart is one of the most unreliable companies out there and that they don’t get many firmware updates although they have very good hardware. just not customer support and firmware updates. and from past experience (cs868) i really dont like the lack of firmware updates i am still waiting for a bootable 4.2.2 for the cs868 and a working youtube app if it wasn’t for people like finless i don’t think that a lot of… Read more »

so what do you guys think finless bob is wright or wrong ??

@adem
Compared to brands like MINIX, Matricom, and Rikomagic, I’d think think finless bob is right to say that Tronsmart does not provide that many firmware update. But compared to other little known brands, they probably do OK.

I personally don’t use Finless ROMs because the workaround he added for Google Play include faking a Samsung Galaxy phone. It’s not an issue if you only have one device, but if you have many they would all show as that phone when you access Google Play in your PC.

well i never had any problems with finless and playstore. to me it does not matter if the os thinks that my device is a samsung phone as long as there are no hidden apps like some of those chinese playstores that come with stock roms i think it was neoniq (gtv220) it had a few hundred apps to choose from. also some of my video apps like diziHDtv (like netflicks for turkish and english tv shows )and uyanik tv (live turkish tv channels) would not work with stock mk808 and mk908 roms but as soon as i flash to… Read more »

Beelink told me they’d sent me one, not sure with air mouse or not, but I’ll review it when/if I receive it.

I mean, who sent one, Beelink or Tronsmart?

@Javi
There’s Beelink in that sentence… I’ve received their A9 yesterday. They wanted to send me all their 4 Kitkat products, but that just too many to review, so I only asked A9 as it’s new.

As always, thanks for your reply!