I had only reviewed on device based on AllWinner A31 before, namely CS868 mini PC which turned out to be disappointing. And recently I’ve reviewed quite of few Amlogic and Rockchip TV boxes, so I’m happy to get a change and try again with another AllWinner A31 based device thanks to VidOn.me AV200 Android Blu-ray Box. I’ll start by listing hardware specifications and showing pictures of the device and the board today, and I’ll write a complete review in a few days.

AV200 is an Android TV box with a metallic enclosure very similar to the one used for Mele X1000 Android Blu-ray box, and with the following specifications:

I’ve received the device in the simple package below that reads “VidOne.me Android Blu-ray Box” 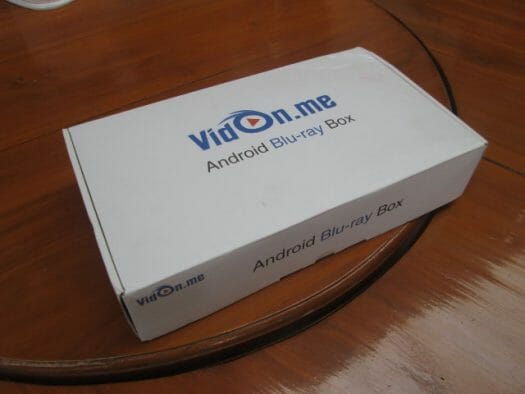 As you open the box you’ll see two QR codes linking to VidOn.me player for Android phones or tablets. I’ll try that during the review.

The box comes with an IR remote (2x AAA batteries not included), an HDMI cable, a 5V/1A power adapter, and a Quick Start Guide in English, but with links poiting to setup instructions in simplified and traditional Chinese, Korean, French, Japanese, German, and Spanish.

A closer look at the device shows a nice metallic casing, a large Wi-Fi antenna, a USB port and SD card on one side, and at the back, an audio jack, a micro USB port, a power jack, an HDMI connector, an RJ45 port, two USB host ports, and an optical S/PDIF output. There’s also a power button, a small window for the IR receiver, and an LCD display at the front.

I’ve also shot an unboxing video for those interested.

Opening the box is fairly easy. There’s nothing under the rubber pad, so you can leave them in place. You just have to remove 4 screws, and slide the top cover. You’ll also notice the “Upgrade” button on the middle left of the picture below.

Once it’s opened we can actually three boards: the mainboard in blue, and the LCD and power button boards in Green,.

The board name is A31-G39A04-V1.30 and it has been designed on 2013-09-17, the MAC address starts with 00:CE:39, a range which interestingly is not assigned to anybody, and the Wi-Fi module used is based on Realtek RTL8188ETV. Searching for the board name, let me to an older article about a Mele media player, and it turns out it’s basically the same hardware as the Mele M9. Other interesting bits are the unsoldered pads: option for an extra 8 GB flash,  SATA connector + USB to SATA chip, etc… And if you want to have a similar model with SATA, Mele A1000G is apparently also based on G39A04. The firmware provided by VidOn.me is different than the one that’s available from Mele, so that will be the key differentiating factor here.

Cooling is achieved with a small heatsink on top of AllWinner A31. To further remove the board from the enclosure, you have to remove four more screws. But after doing that the board would not still come off, because there’s some thermal paste stick the PCB to the metal case, which should be good news in terms of thermal dissipation. Since I’ve not done the review yet, I decided against taking it further apart as it might affect performance.

I’d like to thanks VidOn.me for providing the sample. AV200 normally sells for $200 on VidOn.me, but it’s currently out of stock, and the site reads “new box is coming soon…”, and I could not find another place to buy AV200… So the only option appears to get a Mele M9 which for once appears the be the cheapest on DealExtreme ($110).

How can the have the audacity to call these “blu-ray” boxes? Bluray is a disc format, the fact that it doesn’t have an optical drive means that it can’t play blu-rays.

BTW: props for opening up the gear you get sent. I love that you do this with your gear often before you’ve fired them up. 🙂

@The Cageybee
Yes, I was a little surprised the first time with Mele X1000 Android Blu-ray Box… I was expecting a Blu-Ray player, but it just means they can play Blu-ray rips…

@The Cageybee
Before, I did this after the review, but I must have become overconfident…
My reviews also got longer and longer, so I started to separate the review in two posts (unboxing + review), and it’s more convenient to take all the pictures I need in one go…

i have played this device before, the most important selling point should be the blue ray navi on this device. this team is very good at xbmc developing, but their price for this selling point is no good, plus all winner a31 is really an old cpu chip.

I have heard they are also working on the amlogic chip, so hope they can porting the same xbmc to amlgoic asap.