HiMedia has been releasing and manufacturing Android TV boxes with SATA interfaces based on Hilison processors including Q5 (single core) and Q5II (dual core) for a couple of years. The company is about to release another one with the same enclosure, based on a new Hilicon Hi3798C quad core SoC, that they’ve aptly named “Q5 Quad Core”. 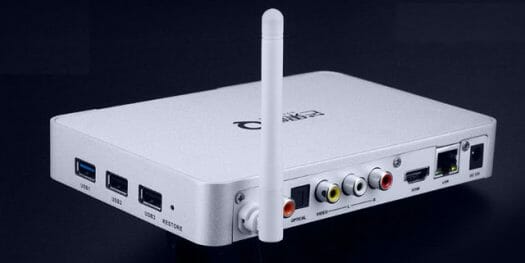 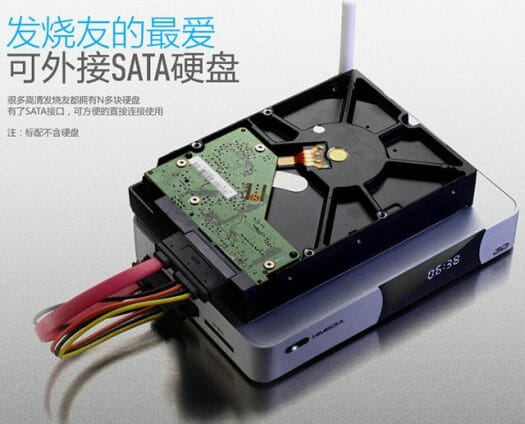 Blu-ray ISO 3D are said to be supported, and Blu-ray BDMV too, but without 3D support, and they claim support for XBMC and 240Mbps videos from the network (SAMBA/NFS) or USB. The hard drive has to be connected externally which may feel a bit awkward, and supports EXT-3, NTFS and FAT32 file systems. Q5 Quad Core (aka Q5 III or Q5 3D4K) runs Android 4.4.2, and comes with a power adapter, an IR remote control, a SATA cable, an HDMI cable, and a quick start guide in Chinese. You may find more pictures, screenshots, and detailed features on ka8.hk (Note: may not be safe for work).

The box appears to be available for sale on JD.com for 699 RMB (~$113). I can see that Linaro is doing some work regularly on Hisilicon STB SoCs (Hi37xx), so there might be a way to get a decent and recent kernel for the box, and an easier ability to run Linux, if that’s something you’d like to do.

Via AndroidPC.es and Eddy Lab on Google+

MiniPC DB has also an article on this new Himedia item, with several pictures, all provided by Chinese sources.
should be a tad better than Minix X8-H

I think Hi3739C has all the features we need. It’s really good. Considering making a board based on it…

@Tom Cubie
But will Huawei sell you the SOC ? And is the SATA support native or just through USB ?

@Marius
“Just through USB” might be quite fast given that the board has USB3.

There may be a board based on Hi3798C made by Tom Cubie. “Radxa Silicon” ?
https://plus.google.com/u/0/+TomCubie/posts/L4jK3zWfUwu

@Marius The sata is native, it even has pci-e…

@Jean-Luc Aufranc (CNXSoft)
wow, native sata support, usb 3.0, awesome!
so does it has official linux kernel support? I ‘m looking for an arm board to replace my raspberry pi, which is mainly used for bittorrent downloading and file server, but too slow sometimes. 🙁 Do you know some board that has both high performance and up-to-date kernel support?
Thanks. 🙂

@Riaqn
You can find all boards supported by mainline in https://github.com/torvalds/linux/tree/master/arch/arm/boot/dts.
However it does not indicate the level of support, some of only barely booting, some are headeless, and to be honest I don’t know if there are any that are fully supported. Even the R-Pi does not appear to be completely supported, and requires patches to run mainline.

@Jean-Luc Aufranc (CNXSoft)
But support of some boards are not in mainline, but from manufacturers. e.g. amlogic provides kernel for s802 in your previous posts 🙂 . I ‘m wondering if there is any board that has better kernel support. I think 3.10 is quite up-to-date, though 🙂

Very interesting board feature wise. Does it support SATA multiplexer?

@Fossxplorer
There’s very little public information about this SoC, it’s not even on HiSilicon website… So I guess we need some leaks, or have the HiSilicon guys come to their sense and release documentation and SDK publicly…

@Riaqn
Yes, sorry I thought you ask about mainline. For boards with proper kernel support you could probably go with the Freescale ones, such as Wandboard, UDOO.. There’s the also HummingBoard from SolidRun but I’ve read bad stories about their firmware support, or lack thereof. Hardkernel ODROID boards should also be good for Linux support, but only 10/100M Ethernet which might be a limitation with your application.

One board that I believe has up-to-date kernel support, meaning mainline support, is Atmel SAMA5D3 Xplained, but no video output, unless you connect an LCD display via the RGB? interface -> http://www.cnx-software.com/2014/04/16/atmel-sama5d3-xplained-board-unboxing-and-quick-start-guide/

@Jean-Luc Aufranc (CNXSoft) hmm, I look through Wandboard, UDOO, and Hardkernel ODROID, all is too expensive for ARM board in my application. 🙁 I ‘m not a developer, just looking for some lightweight board as NAS. 🙂 With $179(which is the price of Hardkernel ODROID in your last post) there ‘re many x86 board for choice, together with memory and hard disk. And the Atmel with only 256M ram is not so good. I decide to wait for the first tvbox of s812, which should have decent kernel support from amlogic. And I would get the DTD file from its… Read more »

@Jean-Luc Aufranc (CNXSoft) Thanks for your link. Looks that the community event is closed, and the special price is not available any more. I have to pay $65 at normal price + $25 shipping. And $90 is not competitive. 🙁 On JD.com you can get a board integrated with celeron c1037U @ 399 RMB and 2G DDR3 memory @ 159 RMB, without shipping fee since I live in China. That is 558 RMB ~ $90. 🙁 With x86 platform there ‘re best kernel support, not to speak of the performance gap between arm and x86. The only problem of x86… Read more »

Played around with this product for a week, it costs me around 100 usd. It’s true this product is still young. The basic functionality such as smb, nfs, external hard drive via sata and usb are working well. Video playback using stock player is smooth, 4k h.264 and hevc videos are tested without a glitch. The hevc videos in the test are from http://www.divx.com/en/hevc-showcase, the original 6.3G h.264 Tears of Steel mkv are also tested, very smooth. it can play bluray iso directly, with simplified navigation bar, audio track & subtitle selection, dts-hd and truehd bitstream is ok. tested on… Read more »

Fresh info: this product will have a PCBA upgrade in September.
@HooYao – there’s a new update, I will test it next week when mine arrives.