Announced just about a year ago, Renesas RZ/A1 ARM Cortex A9 processor family can be used for human machine interface applications, and has the particularly to embed large amount of SRAM, especially the RZ/A1H series with 10 MB SRAM which allows the development of some applications without external RAM chip, lowering both board size and BoM cost. I’ve just come across a development kit dubbed “RZ/A1H Starter Kit”, and the just released Emtrion DIMM-RZ system-on-module both powered by Renesas RZ/A1H SoC. 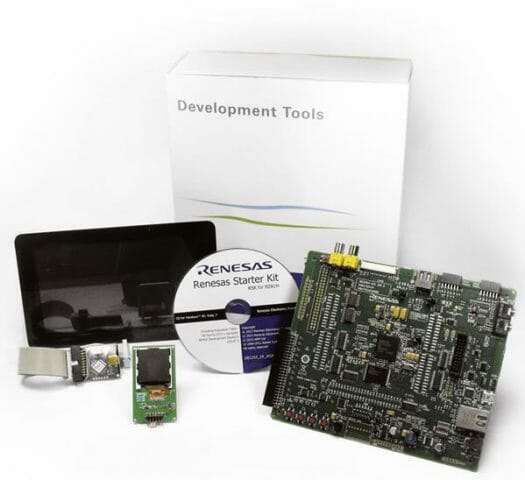 The mainboard has the following specifications:

The board can be programmed without operating systems, but Segger can also provide embOS RTOS for the platform.

Some documentation can be downloaded online via Renesas Starter Kit+ for RZ/AH1 page including schematics (PDF) for the TFT board and mainboard, a user’s manual, a quick start guide, and a tutorial for ARM DS-5. There’s also supposed to be a hardware manual, but I could not find it online. A Windows installer can also be download with ARM DS-5 IDE, compiler, emulator debugger, sample code and documentation (Registration required). The development kit appears to be available now with or without the 7″ TFT LCD module, and it’s listed on Digikey for around $1,100 including the LCD module. But if you’ve working for a company, you may be able to get a free evaluation sample.

If you’ve developed your application with a development kit, and would rather have a CPU module for your end product, instead of designing the complete board, Emtrion DIMM-RZ system-on-module could be one option. 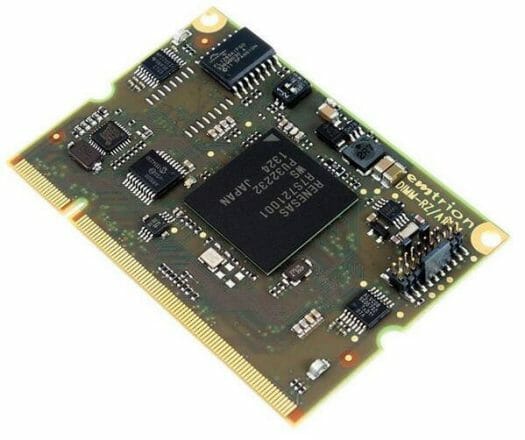 Here are the listed key features for the module:

The company provides Segger embOS real-time operating system with the module by default, but Linux 3.2 can also be used on request. Emtrion can also provide carrier boards, development kits and custom solutions for their SoM. DIMM-Base Cadun is the baseboard that can be used with DIMM-RZ (and other Emtrion DIMM modules). It exposes an Ethernet RJ45 connector, USB ports, HDMI, RGB and LVDS interfaces, serial ports, and various headers for expansion.

I’ll complete this post by embedding an 8-minutes video that explains the advantages of Renesas RZ/A1H compared to traditional MCU and MPU solutions for HMI applications.

Thanks for the mention!