Last months, I tested VolksPC’s Android/Debian unified distribution on MK808 mini PC, which runs both operating systems at the same time, and allows you to switch instantaneously and seamlessly between the two. I was impressed by the performance and stability of the system, although there were still a few software bugs, as well as issues related to MK808 hardware (Wi-Fi disconnection), and possibly its 5V/1A power supply (system reboot when inserting SD card reader or flash drive). The company has now started a crowd-funding campaign on Indiegogo to manufacture dual core Android TV box with their unified distribution. 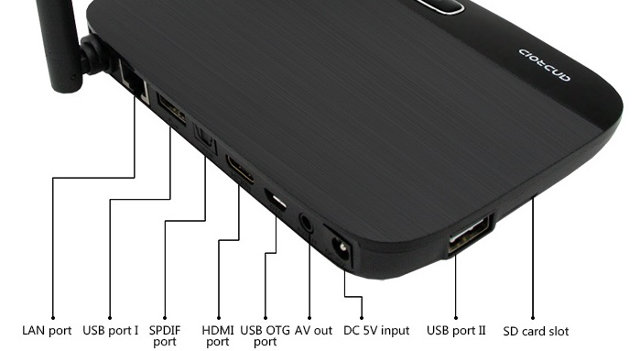 The device runs Android 4.4.2 and Debian Wheezy with XFCE desktop environment with resolution set to 720p (1280×720). The idea with having both operating systems at the same time is to avoid the annoyance that is dual boot, depending on the application you want to run. This leverages desktop applications running in Linux, and Games & video streaming on Android. In the sample I tested (MK808) both operating systems reside in the NAND flash, but in the Indiegogo PC the company opted to run Android in the NAND flash, and Debian in a micro SD card. The class of the SD card is not indicated, but based on my experience, it really matters as with a Class 4 micro SD, Debian may be frustrating to use, whereas a Class 10 micro SD will provided a much better user experience, very close to running the OS from the NAND flash. There’s no 2D/3D GPU hardware acceleration in Debian, but I found out this is not really critical to the performance of the system, at least much less than the storage device performance. VolksPC’s guys even claim that 2D acceleration actually reduces system performance due to the overhead setting up the GPU.

The company tried to raise $80,000 for mass production. The first 100 pieces can be had for $119 (Early bird), after which the pledge will be $129. The device comes with an HDMI cable and a power supply. Since I understand they are using an existing TV box, there’s now hardware development to be done, and they’ll be able to ship the box to backers in October. Shipping is free to the US, but you’d need to add $30 for other destinations. The cost is significantly higher than an equivalent Rockchip RK3066 based Android only TV Box, but if you are the kind of user that frequently switches between Android and Linux, it could be worth it, as both OS run at, or close to, native speed.