ARM still have an edge in terms of power efficiency, but Intel has historically had an edge when it comes to process technology, and the company has announced their first 14-nm processors with three Broadwell Core M SoCs. The new process will also help with power efficiency, as all processors have 4.5W TDP, and Intel claims a Core M laptop will deliver twice the compute performance, and seven times more graphics processing power compared to a 2010 laptop powered by a 18W Core i5 processor, while doubling the battery life. Compared to more recent 4th generation Intel Core “Haswell” CPU, the new chips are said to offer up to 50 percent faster CPU performance and 40 percent graphics on a performance-per-watt basis. 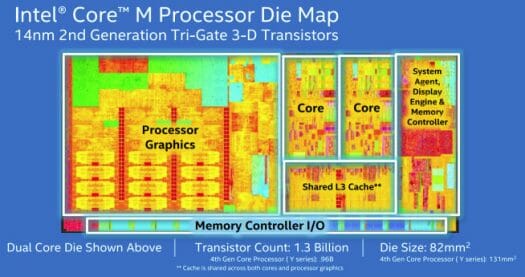 The company reveals three Core-M processors: 5Y70, 5Y10, and 5Y10a, all dual core / quad thread processor with base frequencies between 800 and 1,100 MHz, and turbo frequencies between 2 and 2.6 GHz, as well as an an Intel HD 5300 GPU clocked at 800 or 850 MHz depending on the model. The differences between the three processors are listed in the table below (Source: Anandtech)

5Y10 and 5Y10a are very similar (all specs are identical in the table above), but Anandtech reports one of Intel slides indicates that 5Y10 supports “4W Config Down TDP” (cTDP Down). The GPU will support DirectX 11.2, OpenGL 4.2, and OpenCL 2.0, support UHD resolution, and Intel Quick Sync Video, which should allow up to 1.7 hours extra battery life with a 35Whr battery compared to previous generations. If you want more technical information, you may want to visit Intel Core M page where you’ll find a product brief, and two datasheets.

Intel Core M processors will be found in thin (<9 mm), fanless 2-in-1 tablet/nodtebook hybrids and laptops that will be available later this year. Five companies have announced products with the latest low power chips by Intel: Acer (Aspire Switch 12), ASUS (Zenbook UX305), Dell (Latitude 13 7000 Series), HP (ENVY x2), and Lenovo (ThinkPad Helix). Since all three Core M SoCs have a price of $281 (1k order), they will only be found in high-end laptops or tablets, and all products aforementioned sells for around $1,000 or more. You can get a run-down of four of the devices on Liliputing.

@renw0rp
I think there will be “Broadwell U” processors.

They probably achieve those scores with the turbo freq.