Android One is a program by Google aiming at bringing low cost smartphones to the emerging markets with firmware updates to the latest Android version guaranteed for two years. Three phones part of Android One program have recently been announced for the Indian market: Micromax Canvas A1, Karbonn Sparkle V, and Spice Dream Uno, and Android One phones will be available in Indonesia, the Philippines and South Asia (Bangladesh, Nepal, Pakistan, and Sri Lanka) by the year of the year. The three phones currently available sell for $100, which based on the specs (quad core processor, 1GB RAM, 4GB flash, 4.5″ display) is not exactly an aggressive pricing compared to what is already available from Aliexpress, but the main advantage here is clearly Google support with promised firmware updates, and currently Android 4.4.4. All these phones appear to be powered by Mediatek MT6582, and company decided to release the Linux 3.4.67 source code on Google servers. Please note it’s not the first time Mediatek Linux source code has been released, but at the time, the code was pretty messy, and not standard, so hopefully working with Google may have improved things. 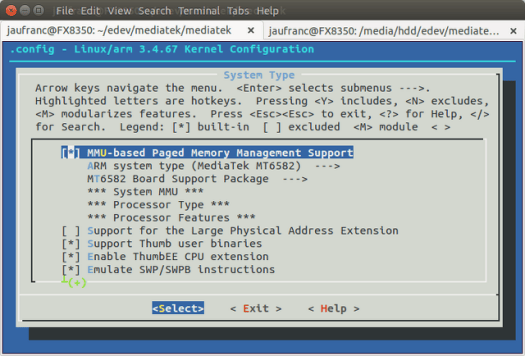 Here’s how you can get it:

Before building the kernel, you may want to install Android gcc toolchain (in Ubuntu 14.04):

Then the build should start with a script::

But it fails looking for an existing external script… Oh well. So I located a config file for MT6582, and completed the build the usual way:

and it could generate zImage successfully.

I’ve also checked the Kernel Configuration, and it seems the “Mediatek Properitary Configuration” (sic) section found in the older 3.4.5 source code has now disappeared, and the company is using a standard method to define the kernel configuration (see screenshot above).

whether this builded Android will run from the uSD card?
I would prefer to protect against damage (The Brick) to the phone 😉

@SQ7MRU, Paweł
I’m not sure how to actually use it… XDA developers forum is the place to go for details.

Where can i get the Propitiatory binaries , like Graphics, WIFI…Then this could be next Nexus .

Looks like the best candidate to port b2g (FirefoxOS) on it.