Seeed Studio sent me two nice little boards that can be used for IoT development: WRTNode and LinkIt ONE. Today, I’ll show pictures of WRTNode and accessories, and go through the “starting guide“, and will test LinkIt ONE board a few days later.

I’ve received WRTnode by Fedex, and the board is stored in a plastic box. 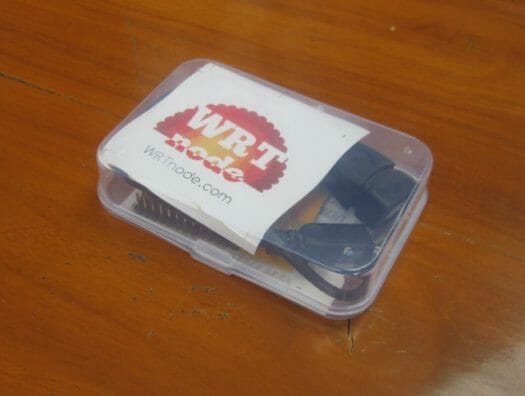 Inside the box, you’ll find the board, a “special” USB used to power the board and as an OTG adapter, a piece of paper with useful links (Wiki), and some WRTnode stickers.

Any micro USB to USB cable can be used to power the board, but this cable is useless to connect USB devices such as flash drives, webcams (OpenCV is supported), Bluetooth dongles, and so on. You could even connect a USB hub to connect multiple USB devices as shown below. 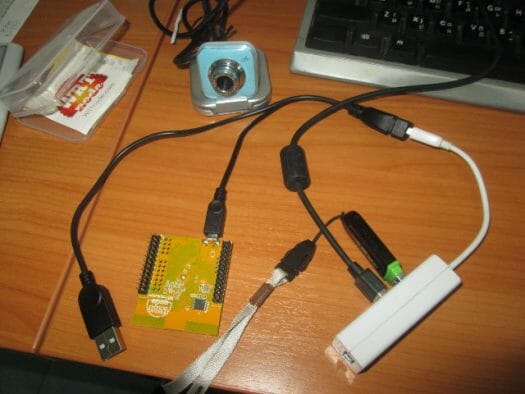 You can also add Ethernet easily by making your own Ethernet cable using T568B wiring standard. I’m not 100% sure it’s safe though, as there are usually some extra components for Ethernet. I’ve included the board pinout chart for your reference. 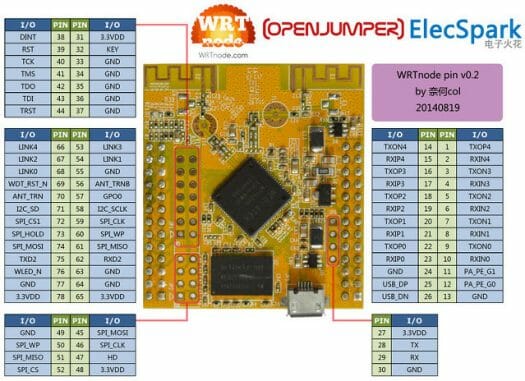 To start the board simply connect the USB cable to a power adapter or a USB port on your computer. After about 10 seconds, you should see a blue LED lit up, and shortly after, you should see WRTnodeXXXX ESSID, where XXXX are the last 4 digit of the board MAC address. Connect it with your computer, and input the password: 12345678.

Normally the board will resolve as several URL, but at first none of them worked.

But you can check the route to see which subnet is used by your Wi-Fi connection:

I could finally ping the board with:

Interestingly, ping openwrt.lan, and the other two URL also work afterwards, so maybe I was a little to impatient during my testing…

The first time you need to connect to the board via telnet in order to set the root password: 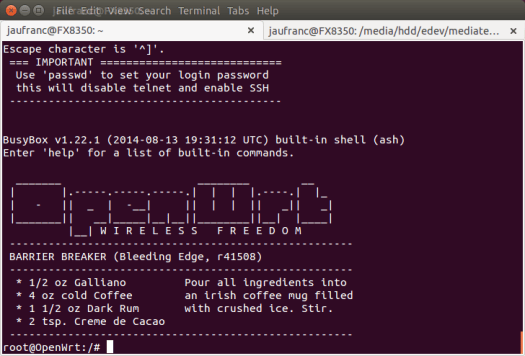 Now change the root password using passwd as you would do in any other Linux machine, and exit the connection, in order to connect via SSH instead:

At this point, you’ve got another Wi-Fi access point on your network, but it’s not connected to Internet, so let’s start by locating the Wi-Fi routers with aps command:

I only have one ESSID here, but this will list all ESSID in your environment. With that data, you can configure WRTnode to connect to your Wi-Fi router using vw command (vi wireless?):

You need to change the lines in bold above using the data from aps. The first line is the Channel (Ch) , and the four lines in the wifi-iface section are pretty much self-explanatory. Save the file with Esc + “:wq”.

aps and vw do not report security features in the same way. Here’s the conversion table in case you don’t use WPA2PSK/AES:

and verify WRTnode got an IP address from the Wi-Fi router using DHCP:

Once I had a problem connecting to my Wi-Fi router, and it turned out my router was configured to automatically select the channel, and it had switched to Channel 4. Running vw again to change the configuration with “option channel ‘4’” made the connection work again. There’s probably an option in OpenWRT to automatically detect the channel, but I haven’t investigated.

You can also install packages for okpg. I tried to install luci, but it was pre-installed, so I added openvpn support instead:

That’s it the quick start guide is completed.

Out of the 16Mb SPI flash, only 7.3M available are available for OpenWRT, the  rest is probably used by the bootloader. There’s nearly 64MB RAM available, and 29MB free.

If you are interested in the board, you can purchase it from Seeed Studio ($25), which provided the board for this review, but it’s also available on other shops such as DFRobot or Eleduino for the same price, although shipping fees may vary. To go beyond this Quick Start Guide, visit WRTnode WiKi to access the source code, schematics, and various documentation including tutorials.

With regards to the Ethernet, there are usually 2 external components needed: a phyceiver and a transformer (also referred to as magnetics) The MT7620n already has phys built-in, so all that is needed is the transformer as it is required by the Ethernet specification. However, since the transformer provides isolation and there’s supposed to be one on either side of the link, it is usually safe (albeit wrong according to spec) to assume that the other side is isolated and the link will work with just cable – especially for short runs. Personally, I’d try and get one of those… Read more »