Linksprite recently announced PcDuino3 Nano development board powered by AllWinner A20 dual core processor. PcDuino3 Nano is, as you can expect, a smaller and cheaper version the company’s PcDuino3 board without Wi-Fi module, LVDS header, and I2S interface. The board does not appear to support Li-Po batteries either, but it adds one extra USB host port compared to its big brother. 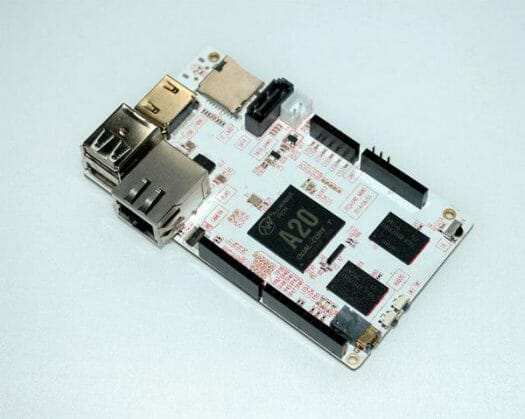 In some ways it’s similar to Cubieboard2 but in a smaller factor, with Gigabit Ethernet, but lacking the audio ports. The company still provide Ubuntu 12.04 and Android 4.2 images and source code for the board, as well as an API to control the I/O pins available on the Arduino headers (UART, ADC, PWM, GPIO, I2C, SPI).

PcDuino3 Nano can be purchased on Linksprite or Cutedigi for $39. Shipping is not included, and I got a ridiculous quote for UPS shipping to Thailand ($78) on Cutedigi, but USPS First Class is available on Linksprite for $6.75. You can also visit PcDuino3 Nano product page, and access the download, Wiki, and tutorial sections of the site to find out more.

Thanks to John for the tip.

looks interesting, but, isn’t 1000M ethernet is part of A20, do they mean they used a different ethernet chip to get A20 a real 1Gbps ethernet?
as far as I know there is no MIPI interface on A20, which is strange too, i hope the feature list here reflects the real hardware.

@xxiao A20 has both 100M and GbE interfaces. Cubietruck ships with GbE on A20.

Many camera chips are dual parallel/MIPI. Maybe something got lost in the translation and they don’t realize the camera is running in parallel mode.

@Jon Smirl
Just ordered one and will check this out next week. I know A20 has 1G but it rarely runs at that speed so I was thinking maybe they added a new Ethernet chip, then at $39 it’s very unlikely. Same for the MIPI thing. Let’s see what’s really on the board after I receive the board.
By calling itself PCDUINO, is it pin-compatible to all those Arduino accessories? Unclear to me but will find out.

@adem XBMC / Kodi still have no support for Allwinner A1x or A2x series.

These use CedarX VPU which Allwinner haven’t released compatible source code or libraries compatible with GPLv2 or GPLv3 projects.

Community reverse engineering project looks to have stalled, so only wordaround is to use libhybrid with Android binary libraries, and there is no support for that in updtream XBMC / Kodi yet, if it will even get it since it is a workaround hack and not a proper solution in the spirit of open source.