Mediatek seems motivated in getting involved with maker and open source communities. Thanks to its works on Android One with Google, the company recently released the Linux kernel source for MT6582 processor, and with a separate endeavour, launched Mediatek Labs bringing LinkIt ONE platform for IoT and wearables to market, as well as a preview release of an Android SDK for its mobile processors.

Features of the SDK includes: 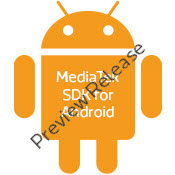 The current APIs have three levels, and allow app developer to access:

You can also consult the API documentation online, and to get started download MediaTek SDK for Android Developer’s Guide. Although many of the API features can be tested on the emulator, you’ll probably want to do some testing on actual phones, and Mediatek will soon provide a list of reference Android phones.

If you happen to live in the United Kingdom, Mediatek will showcase both LinkIt platform and their Android SDK in Manchester at XDA:devcon on September 26-28, 2014.

If this SDK works for all Mediatek SoC then maybe we will see official XBMC / Kodi support soon?

Are there any cheap media players / set-top boxes available?

@Harley
I think the audio/video part is mostly for the camera, and there might not be any audio/video playback interface in that SDK (TBC).
Never seen Mediatek media players before.

Mstar merged with Mediatek, so any Mstar based media player is basicly Mediatek.

@Jean-Luc Aufranc (CNXSoft)
Has anything more been released? Or are we still dealing with just this one open mediatek CPU/SDK?

@Jacob Gadikian
There’s LinkIt ONE, and source code for Android One phones too.