Technologic Systems, as US based embedded systems solutions company, has announced availability of their TS-7250-V2 industrial grade PC/104 single board computer powered by Marvell PXA166 or PXA168 ARMv5 processor, with 512 MB RAM, 2GB eMMC SLC flash, single or dual Ethernet, and an optional Lattice FPGA with up to 17k LUT (Look-up Tables) among other features. They also have two enclosures namely TS-ENC720 (1x RJ45 port), and TS-ENC720-2ETH (2x RJ45 ports) for the boards. 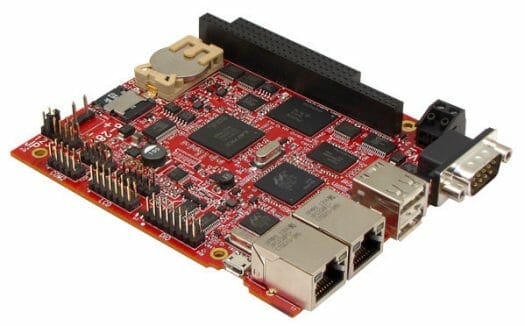 TS-7250-V2 can boot from either the onboard eMMC SLC flash or microSD card to an embedded Linux distributions based on Linux kernel 3.14, or Debian 7 “Wheezy” distribution. The board can boot in 0.87 seconds to a busyBox terminal shell, but the company also provided an older Linux 2.6.34 kernel that can boot in 0.52 seconds to the command line. The company claims there’s no proprietary source code in the kernel as hardware specific functionalities are handled by user-space utilities such as spictl, sdctl, xuartctl, etc…, and the company also provides drivers for all on board peripherals. The company will also provide Opencore source core for the FPGA. More details about software support can be found on TS-7520-V2 Wiki. Schematics (PDF) and mechanical drawings (PDF) can also be downloaded from the documentation page.

Looks really great. Like an ultimate developer and hacker board with the newest (mainline?) kernel.