Most full sized TV box comes with both Ethernet and Wi-Fi connectivity, but if you live in remote area internet may not be easily available, except possibly via 3G or LTE. There are several ways to handle that. You could connect a 3G USB dongle to your box, but this assume the firmware on your box supports it, or you could gt one cheap of these cheap routers with a USB port, plug the 3G dongle into it, and connect your media player to the router via Wi-Fi or Ethernet. If you’d rather have a single device with an easier setup, MediaBox MBX-3G could be an interesting option. 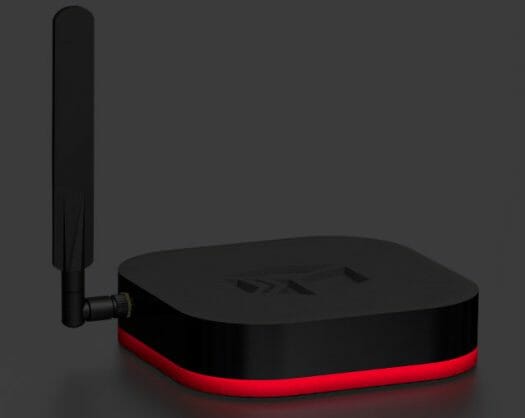 The box comes with HDMI and AV cables, a USB cable, a power adapter, and a touchpad remote (which looks very much like Rii mini i8 remote). There’s also a more traditional model without 3G called MediaBox MBX.

The device runs Android 4.4.2 with OTA firmware update support, and online videos services such as Netflix, Hulu+, HBO, YouTube, Vimeo, BBC iPlayer, TuneIn,  Spotify & VIDI., are said to be working on the device. Since the device slogan is “Play Anything. From everything. Anywhere”, the South African start-up (MediaBox) behind the project is also developing iOS. Android, and Microsoft Phone apps to interface with the device.

A flexible funding Indiegogo campaign has been launched to raise funds ($65,000 or more)  to complete software development and start mass production. A $120 “early bird” pledge would be you a MBX-3G, while $90 is asked for MBX without 3G. Shipping i $10 to the US and South Africa, and $20 to the rest of the world, with delivery scheduled for June 2015. More information may also be found on MediaBox website, including support forums.

Thanks to Jvan for the tip.

@Jean-Luc Aufranc (CNXSoft)
Exactly!:p I guess this suits for the 3G only scenario better.
(Generally doesn’t suitability of a non-3G TV box modem/router depend on the TV being near the internet socket – or long cables?)

@onebir
If you are too far for Ethernet, you’d normally use Wi-Fi.

@Jean-Luc Aufranc (CNXSoft)
Exactly – so for a non-3G TV box modem/router combo you need a separate modem-router unless your tv and incoming internet network socket happen to be close together… (Maybe this is common in apartments built after cable TV became popular?)