Most of the time people compare the performance of different hardware platforms, but since Wandboard released an Android 5.0 image in the last few days, I wondered what difference two years of software development may make by comparing benchmark results. So I ran both Antutu 5.6.1 and Vellamo 3.1 on Android 4.1.2 Jelly Bean (android-4.1.2-wand-dual-20130411.zip) and the latest Android 5.0 Lollipop firmware for Wandboard Dual (Freescale i.MX6 Dual) development board. 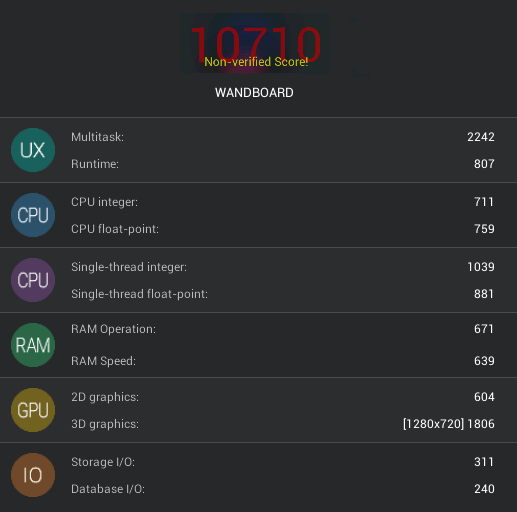 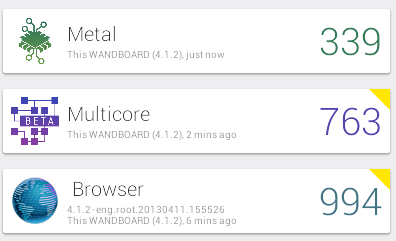 You’ll notice the yellow triangle on the top right corner of the multicore and browser results due to some warning related to missing CPU frequency information, and a DOM timeout. 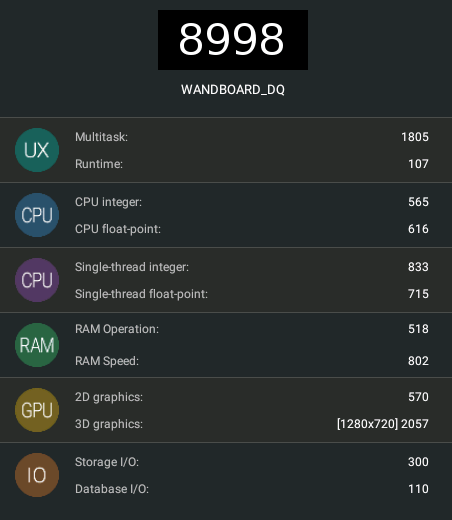 The 2D graphics looked weird at some point as it zoomed out on1/4 of the display. The screenshot did not show the total score, so I added it manually to the picture above. 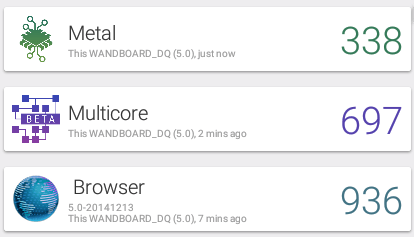 Vellamo did not report any anomalies during testing.

The overall scores are disappointing, and I was really expecting to show how much faster Lollipop is compared to Jelly Bean, but maybe further performance improvements will come as Wandboard’s Lollipop image is a beta release. The detailed scores show some striking differences. In my previous comparison I used delta in percentage, but that confused some people, so instead I’ve used the ratio between Lollipop and Jelly Bean, meaning a ratio of 1 has the same performance, a Lollipop is faster with a ratio greater than 1, and Jelly Bean is faster with a ratio smaller than 1.

Lollipop is only faster in the RAM speed and 3D graphics Antutu benchmarks, but slower for all other tests. The runtime test is much slower, maybe because of the switch between Dalvik and ART. I used the same micro SD card for the testing, yet database I/O is over 50% on Lollipop. I did get some error messages in the serial console with Lollipop when the system frees memory, but maybe that’s the normal process of Android killing background processes to reclaim memory:

Other differences between Jelly Bean 4.1 and Lollipop include a unified image for Solo, Dual and Quad versions of the board since the board files have been replaced by device tree, and the SD card image is now 8GB, instead of 4GB.

May be different clock settings?

thanks for the work, Jean

I’m going to blame this on Android 5.0 not having the right optimizations ( read cheats ) implemented yet.

@Marius Cirsta
I’m not sure Freescale/Wandboard has much to gain by cheating on Antutu.
How would you explain Vellamo scores then? OK, the difference is not as great.

@Jean-Luc Aufranc (CNXSoft)
Well I’m not sure but seeing how almost all cheat in these benchmarks …. Still it might not be the case here.
I do think that these popular benchmarks should be taken with a grain of salt though. I’d fire up a game and try to get the FPS count and judge by that. Not sure if it’s easily doable though.

How this compares to other devices? It might be related to SW optimization. How it is on nexus devices for example?

I’d be curious to know if the I/O benchmarks are affected by the fact that Lollipop enabled disk encryption by default, so assuming the data partitions was wiped (or clean already) when the system image was flash all disk traffic is running through the kernel’s dm-crypt, something which will be much slower if not heavily optimized on the device. Encryption was available in Jelly Bean, but rarely enabled.

If the Lollipop disk is encrypted, the Jelly Bean disk should be as well before running the test.

We launched a Lollipop beta that is far from polished and optimized and is a preview release. The Wandboard is one of the few community boards that continuously receives updates and rather than wait until there is a polished version.

@gicho
It’s quite difficult to find hardware that will both run Android 4.1 and Android 5.0. The only Nexus device that could do that is Nexus 7 Grouper -> https://developers.google.com/android/nexus/drivers#grouper

But that require people to flash both firmware, and run the latest benchmark apks, since Antutu 5.x and Antutu 3.x / Vellamo 2.x / Vellamo 3.x scores are not comparable.

It looks like Android just follows the way of most operating systems. From software to bloatware in just one or two releases.